Craig Iredale enlisted into the Parachute Regiment in June 1987 and began P Company with 531 Platoon. After an injury on he was back squaded and Passed Out with 532 Platoon on 19 February 1988.

Private Iredale was posted to B Company (Coy) 1st Battalion, The Parachute Regiment (1 PARA) and in July 1988 went on the first of many tours on Operation Banner, Northern Ireland.

On returning from Northern Ireland he was posted to Mortar Platoon, Support Coy.

After promotion Lance Corporal Iredale served with C Coy and went on a two year posting to Northern Ireland.

L/Cpl Iredale went to Depot Para as an arms storeman before the depot’s move in 1993. Returning to B Coy 1 PARA and more tours of Northern Ireland.

He then went in 1998 to The Infantry Training Centre Catterick (ITC Catterick) as an Instructor in Para Coy. 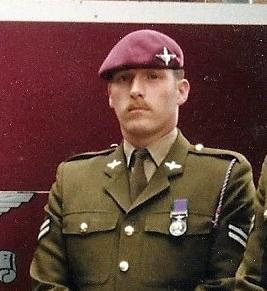