Charles Dennis Harling was granted a commission, as a Second Lieutenant in the Corps of Royal Engineers on the 30 March 1940, and went on to carry out four combat parachute jumps during the course of the Second World War.

As a Lieutenant he was one of the first officers to be assigned to the 1st Air Troop, Royal Engineers and did Parachute Course No 4 at RAF Ringway, 17 – 23 December 1941.

He went on to command the Detachment of Royal Engineers on the Bruneval Raid on the 27/28 February 1942.

In the North African campaign he commanded ‘B’ Troop, of the now expanded unit, retitled the 1st Parachute Squadron, Royal Engineers, and was with the 2nd Parachute Battalion when they dropped at Depienne on the 29 November 1942.

For his actions on this operation earned him the award of the Military Cross, his Citation reads as follows:

For conspicuous gallantry and unfailing devotion to duty.

“On the afternoon of the 1 of December, 1942, this officer was in command of an RE Troop operating with 2nd Bn The Parachute Regiment, in the hills called DJ ST BOU HADJEBA (Map Ref TUNIS K 0527). The Battalion was heavily attacked by the enemy and there were many casualties. Some of these were in isolated positions on the hillside which was under heavy enemy machine gun and mortar fire. Captain VERNON without any regard for personal safety made his way across the spur and brought two wounded men back to the Regimental Aid Post. This conduct and leadership throughout the operation were an inspiration to all under his command"

On the 22 May 1943 he was posted to the 2nd Parachute Squadron, RE and took over as the Officer Commanding, after the original Commander, Major P Baker was injured in a car crash on the 19 May 1943.

On the 11 September 1943 he, and the Squadron, proceeded to Taranto in Southern Italy, aboard HMS Princess Josephine Charlotte, as part of Operation ‘Slapstick’.

The Squadron immediately moved up to the front line, near the town of Palagianello, in support of the units of the 2nd Parachute Brigade.

The Squadron remained with the 2nd Parachute Brigade when it was left in Italy as an Independent formation in November/December 1943, and saw extensive action throughout the rest of 1943 and into 1944.

In May 1944 they were withdrawn from ‘the line’ and moved to the Rome area to carry out parachute and engineer refresher training in preparation for an airborne operation. This turned out to be Operation ‘Dragoon’, which took place near Le Muy and La Mitan in Southern France, on the 15 August 1944. Major. Vernon jumping No 1 from aircraft No 45, landed accurately on DZ ‘O’, the main drop zone for the Brigade. The immediate tasks were to clear the surrounding fields of obstructions (for the later planned glider landings), the putting out of minefields, the recce and preparation for possible demolition of bridges in the area, and locating any German filed stores and vehicles. All tasks were completed within a few days and after a week the Squadron, with the Brigade, was withdrawn back to Italy.

They did not have long to wait for their next operation. On the 12 October 1944, ‘A’ Troop was sent with the 4th Parachute Battalion to drop on Megara airfield in Greece as part of Operation ‘Manna’. Two days later Major. Vernon, leading the rest of the Squadron, also jumped onto Megara airfield.

Major Vernon remained in command of the Squadron until the end of the War.

His life after this point is unknown. 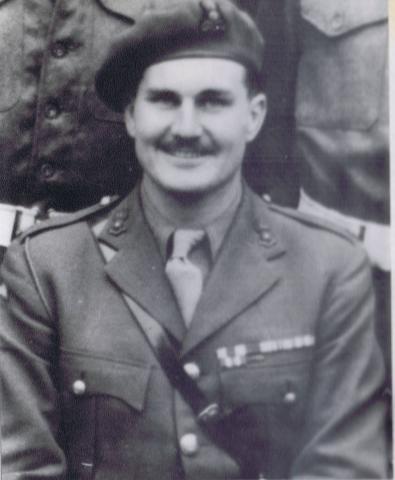