Bernard Ridings was granted an emergency commission in The Parachute Regiment in September 1943, having served in the ranks of the British Army since 1939.

He qualified as a military parachutist on course 88, which ran at RAF Ringway in October 1943. The course instructors’ notes record that he was a “good performer, high standard obtained and good leader.”

Ridings subsequently served with 8th Parachute Battalion and commanded No 5 Platoon, B Company, during the Normandy campaign in 1944.

He remained in the Army after the war, transferring to the Royal Army Service Corps (RASC) in August 1947, and was promoted to substantive Captain later that year.

Ridings later served as second in command of 63 Company RASC, which provided logistical support for 16 Parachute Brigade, and took temporary command of 63 Coy while it was based in the Canal Zone (Egypt) in 1952, following the ill health of the Officer Commanding.

He was promoted to substantive Major two years later and transferred to the Royal Army Pay Corps in June 1961.

Bernard Ridings retired from the British Army in 1977 after approximately 37 years continuous service. 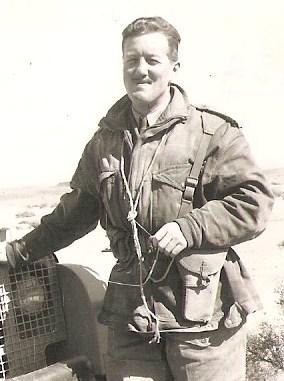