Antony Mutrie Frank was born in 1917. He gained a scholarship to Stonyhurst College in 1931, and was a keen sportsman and academic.

Tony joined the Lancashire Fusiliers at the start of the war as a 2nd Lieutenant, going on to train with the Commandos where he saw service in a number of operations.

He later joined the Airborne Forces, where, during Operation Fustian, the attempt to capture Primosole Bridge, in Sicily, on the 13 July 1943, he commanded a platoon of ‘A’ Company, 2nd Parachute Battalion.

Landing early on the Drop Zone, the platoon made its way towards the bridge, coming under machine gun fire as they did. Running low on ammunition and men, Lieutenant Frank crossed the bridge and made his way to the Forming Up place, meeting up with another platoon commander.

Forming an ad-hoc platoon from this group, with one officer in command of each section, Lieutenant Frank assumed command and decided to attack the ‘Johnny I’ feature without further ado. At approximately 03:15, they began to make their ascent, with one section proceeding up the northern face of ‘Johnny I’, a second around the eastern, while Lieutenant Frank himself led his group up the middle. The party moving around the northern face took a number of Italians prisoner who were hiding in caves, but otherwise met no other opposition. The other two were fired on by machine guns about half way up the hill, but soon overcame these with grenades and took 40 Italian prisoners in the caves. Moving on to the summit, they drew more fire but similarly brushed this aside and took another 80 prisoners. Lieutenant Frank's small force was now in control of ‘Johnny I’ and 130 prisoners. At 04:00, Major Lonsdale arrived with the remainder of "A" Company and proceeded to consolidate the defences.

For this daring action, Lieutenant Frank was awarded the Military Cross.

In September 1944, Captain Frank was second in command of A Company, 2nd Parachute Battalion, when they parachuted into Holland. Passing through Oosterbeek on the first afternoon, he noted: ‘... the incredible number of orange flowers or handkerchiefs that suddenly appeared like magic. The Dutch were very much in family groups, in staid clothing, out on this fine Sunday afternoon. The second memory was of the problem of trying to stop them slowing our men down by pressing cakes, milk, etc., on them. It was an atmosphere of great jubilation at the start of the move, mainly in the country area near Heveadorp and in Oosterbeek, but it petered out when the first hold-up and sporadic firing started. There weren't so many Dutch out then, but a few stout ones stayed and watched the fun.’

Captain Frank reached the Bridge with ‘A’ Company during the evening, and was given command of it when Major Tatham-Warter took over command of the Battalion, replacing Lieutenant-Colonel Frost who took charge of the Brigade. During the heavy fighting on Tuesday 19 September, three German Mk III tanks positioned themselves amongst the British positions in areas where they could not be engaged by anti-tank guns. From here they heavily shelled No.3 Platoon in their pivotal house, just to the east of the bridge and effectively maintaining any connection between the British forces either side of it. Captain Frank ordered Lieutenant McDermont to evacuate his platoon while he and another soldier attempted to deal with the tanks with a PIAT. From a distance of 40 yards, he engaged one tank and hit it in the rear, putting it out of action. The other two promptly withdrew.

He recalled: ‘Digby Tatham-Warter came walking calmly across from Battalion HQ with his brolly, quite unconcerned about any danger. He was very angry with me for letting McDermont's platoon come back and ordered me to retake the house. I got McDermont's platoon together - fifteen to twenty men only - and they set off from underneath the bridge, all very tired, just shrugging their shoulders and going back, but in no defeatist mood or anything like that. They went back and pushed the Germans out; there was probably about the same number of Huns. McDermont was shot as he went along the hall - in the lower stomach, I think; he was conscious, but there was a lot of blood. I jabbed him with morphine, and he was taken away. Then we were attacked from the direction of the banked ramp. We manned the windows and answered back, polishing off at least four of them. One came crashing forward very bravely until we stopped him.’ Lieutenant McDermont died on Friday 22 September.

Wounded in the ankle by shelling on 20 September, Captain Frank was taken prisoner on the following day when British resistance finally collapsed, and then sent to the St. Elizabeth Hospital for treatment. With him was Major Tatham-Warter, who was similarly slightly wounded, and made it plain that he had no intention of being a prisoner for longer than was necessary. That night the two of them climbed down from a first floor window, crawled through the hospital gardens and finally reached the railway line a mile to the west of the hospital where, quite exhausted, they halted until dawn. As it grew light they noticed a farmhouse some distance away and, eager to obtain some food, they watched it for some time before Tatham-Warter decided to knock on the door. The lady who owned the property took them in, fed them a meal of eggs and cheese which they eagerly devoured, and put them to rest in the loft of a barn. Having slept until the afternoon, they were roused by Menno de Nooy of the Ede Resistance, who took them into his care.

They were taken to a farm in the small Warnsborn forest, where they lived in a secret compartment in a shed, though in the evenings they emerged to play cards with the farmer and cut home-grown tobacco for cigarettes. It soon became clear that several hundred airborne personnel were in hiding around the Ede area and the Resistance were having trouble in concealing and administrating such numbers. Tatham-Warter, having established contact with Brigadier Lathbury, Lieutenant-Colonel Dobie and Major Hibbert, effectively took charge and began to organise the evaders into a sort of coup-de-main force to spearhead any attempt by the 2nd British Army to cross the Rhine. When it became clear that there would be no such attempt, efforts were made to arrange for the withdrawal of this force to the Allied lines. Operation Pegasus took place on the 22 October, and saw the completely successful evacuation of 138 men, including Captain Frank. For the part he played in administering this force, he was Mentioned in Despatches, and was also awarded the US Silver Star for his conduct during the Operation.

Having retired from the Army as a Colonel, Tony Frank joined the Colonial Service and spent time in Ghana and Somalia before returning to Britain during the 1960's. It was in Ghana that he married his wife, Clare Margaret, with whom he had five sons; each following in their father's footsteps at Stonyhurst College. Thereafter he was director of the Spastics Society until his retirement in 1982.

The stick landed on the Drop Zone in the area 915663 some 20 minutes before scheduled time. 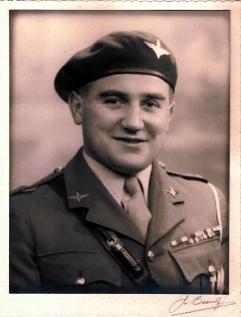