General Sir Anthony Heritage Farrar-Hockley began service with Airborne Forces during World War 2, fighting in Southern France and Greece, where he won an MC. He went on to become Commander-in-Chief of the Northern region of NATO during the final years of the Cold War.

Born in 1924, Anthony (Tony) Farrar-Hockley was educated at Exeter School but ran away under age to join the army at the outset of war, only to be returned to school. On his second attempt, he enlisted in the 70th Young Soldiers’ Battalion, before attaining a commission in 6th (Royal Welch) Parachute Battalion in 1942.

After serving in Palestine in 1945-6, he returned to his old regiment, The Glosters, where he was awarded his first DSO while adjutant at the battle of the Imjin River during the Korean War (1950-1953). When a permanent cadre of officers was formed for The Parachute Regiment in the 1950s, he rebadged .

TFH, as he was often known, commanded the 3rd Battalion, leading them in the successful operation to clear the western Aden protectorate in 1964 after a revolt by Radfani tribesmen. For this action, he was awarded a bar to his DSO.

Later, in 1966, he took command of 16th Parachute Brigade; and in 1969, he became the first Commander Land Forces in Northern Ireland after the troubles erupted. While the 1st Battalion were to become the province reserve, 16th Parachute Brigade also served under him in this new theatre of operations. Having survived an ambush during 1970, the subsequent IRA bombers’ attempt to kill him and members of his family in 1990 was foiled by the prompt action of a former 3rd Battalion soldier, Sergeant Ted Olive.

Tony Farrar-Hockley was a prolific writer. Among seventeen books of military history were a biography of the German Parachute General Kurt Student, Airborne Carpet - a study of the events at Arnhem - and a history of the Army Air Corps.

He was Colonel Commandant of The Parachute Regiment from 1977-1983 and Chairman of the Airborne Forces Security Fund from 1999 to 2004.

In late April 1964, British Army Trucks were rumbling up the Dhala road towards the village of the Thumier, situated in the foothills of the Radfan mountains north of Aden.

GENERAL FARRAR-HOCKLEYS SHORT ACCOUNT OF HIS EXPERIENCE DURING OPERATION DRAGOON 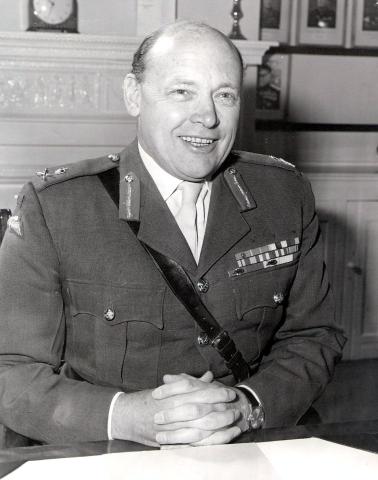