Anthony Greville-Bell was awarded a Distinguished Service Order for his actions behind enemy lines on Operation Speedwell in Italy, 1943, while serving with the Special Air Service Regiment. He also served in the post war SAS and went on to become a famous scriptwriter in the 1970s, sculptor and amateur musician.

Tony was born in Sydney, Australia, and educated at Blundell’s School, Devon. He was granted an emergency commission in the Royal Artillery on 7 June 1941 and promoted to War Substantive Lieutenant in the following year.

By 1943 Tony was serving with 2 Special Air Service Regiment. Later that year he was selected to take part in Operation Speedwell, a parachute mission into Italy behind enemy lines to interrupt German military rail movements across the Apennine passes.

Tony was badly injured on the drop, after landing on a rocky mountainside at night, but organised his group to continue its planned sabotage activities. After two weeks, with explosives exhausted, he organised his party’s exfiltration. They reached the safety of Allied lines after 73 days and a march of some 250 miles. Tony was awarded an immediate DSO for his actions.

After the war he served in the Territorial Army (TA) with 21 SAS Regiment, and temporarily relinquished his captaincy to serve as a Lieutenant in the Regular Army with 22 SAS Regiment, on a short service commission, during the Malaya emergency.On completing his tour he returned to the SAS TA and was promoted to the substantive rank of Major in 1955, retiring the following year.

In later life he became a successful scriptwriter and his work includes the scripts for three films - Perfect Friday (1970), Theatre Of Blood (1973) and The God King (1975).

Tony developed his interest in sculpture in the late 1980s and began producing commercial works, including a memorial sculpture for the SAS Garden of Remembrance.

His keen interest in amateur music also led to the formation of the Learning Orchestra which was over 50 strong at the time of his death in 2008. 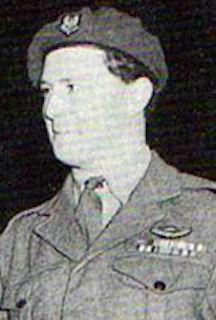