Allen James Maule Parry was the son of the Reverend Allen James Parry and Muriel Constance St John Parry, of Leytonstone, Essex. He was one of four sons, all of whom served in the forces. His brother, the Rev George Parry served with the 7th (Light Infantry) Parachute Battalion and was killed in 1944 in Normandy.

When the 10th Battalion The Essex Regiment converted to the 9th (Essex) Parachute Battalion in December 1942, Major Parry also transferred to The Parachute Regiment. He attended Parachute Training Course number 47 at RAF Ringway between 18 January and 1 February 1943. His report stated that he ‘jumped very well, very keen and proved an excellent example’.

Major Parry commanded A Company during the D Day operations at Merville Battery. The objective was to land inside the Battery and attack the casemates to destroy the guns.

Major Parry was given command of the advance party who were to jump into the Battery before the rest of the Battalion, to establish the rendezvous (RV) point. The operation was risky, and Major Parry chose as few married men as possible from the volunteers.

Flying from RAF Harwell in an Albermarle aircraft, Major Parry recalled the journey out: ‘The only entrance was the aperture in the floor of the aircraft. One had first to crawl under the fuselage, grab a doubtful ladder and then, by using every ounce of strength, level oneself into the interior. When all ten of us were in, we were sweating like pigs and cussing each other because of our extreme discomfort.’ From The Day the Devils Dropped in, by Neil Barber.

The Battalion was scattered over the surrounding countryside, and the men struggled to find the RV point. Major Parry recalled: ‘I eventually found the tree I was looking for and was amazed to see my batman (Pte George Adsett) was already there. His direction finding at night was evidently better than mine.’ From The Day the Devils Dropped in, by Neil Barber.

Eventually the decision was made to proceed with the assault on the Battery, despite the fact that only around 150 men had arrived at the RV point. Major Parry was to lead the party in the absence of Major Dyer of C Company.

As there were no communications, Major Parry blew on a whistle to signal the beginning of the assault at 4.30 am. The path the men took to the Battery led through a minefield, littered with bomb craters.

As Major Parry advanced, he felt something strike his leg, which collapsed, causing him to fall into one of the craters: ‘In the bottom of my rather personal bomb crater, I assessed my position. My left leg was numb and my trouser leg was soaked in blood. Having a miniscule knowledge of first aid I removed my whistle lanyard and tied it to my leg as a tourniquet. My knowledge was evidently too limited, as I applied it to the wrong place. Realizing, after a brief interval, my error, I removed it, thus restoring some form of life to my leg; sufficient at any rate, to enable me to clamber out of my hole and continue with my appointed mission.’ From The Day the Devils Dropped in, by Neil Barber.

He then made his way to the Battery in the wake of the assault to view the damage that had been caused to the guns. Inspecting No 1 casemate, to his dismay ‘I saw not a 150mm gun, as was expected, but a tiny, old-fashioned piece mounted on a carriage with wooden wheels. I estimated it to be a 75mm and it was clearly a temporary expedient pending the arrival of the permanent armament. This was an awful anti-climax, and made me wonder if our journey had really been necessary.’ From The Day the Devils Dropped in, by Neil Barber.

Once all the guns had been disabled, he gave orders to light the yellow smoke candles that would signal the success of the operation to HMS Arethusa which was due to begin a bombardment of the Battery if the operation was not a success.

The remains of the force then withdrew to the RV point. Major Parry, suffering from severe blood loss, limped after his men but fell behind. Seeing an abandoned wheelbarrow, he used it to propel himself along until he was passed by Sergeant Taylor, who pulled him to the RV.

Their arrival into the RV point was greeted with joy. Major Smith recalled: ‘He (Parry) took a brandy flask from his pocket, gulped a mouthful and beamed, "A jolly good battle, what?" The grim faces of the men burst into smiles, and the sullen group of prisoners looking on in bewildered amazement. He insisted on being allowed to stay with the Battalion, but the Commanding Officer (Otway) ordered him to go to the Regimental Aid Post and he did so reluctantly.’ From The Day the Devils Dropped in, by Neil Barber

He was evacuated to the Field Hospital by truck, stopping en route in a Chateau after an ambush. He was then taken to England for treatment of his wound.

Having recovered from his injuries, he re-joined his Battalion in Normandy, serving in the Ardennes, and in Operation Varsity over the Rhine.

For his actions, he was Mentioned in Dispatches, and awarded the Military Cross.

The citation read: ‘Major Parry jumped with the Battalion on 6th June 1944 in Normandy and on 24th March 1945 over the Rhine. He has taken part in every action fought by the Battalion in France, Belgium, Holland and Germany, and has never deviated from the highest standards of leadership and courage. During the assault on the Sallenelles battery on 6th June 1944, although wounded in the leg early in the fight, he led his party with skill and determination against considerable odds so that their task of destroying the enemy guns was completely successful. He then organised the withdrawing of the Battalion from the battery, only handing over command, when no longer able to walk. Evacuated to England, he soon rejoined the Battalion and as Second in Command during a prolonged period of intense shelling and mortaring, he displayed a steady courage and cheerfulness as he went about among the men, which was of inestimable value. Since then he has commanded a Company with unflagging devotion to duty, leading his men in action with calmness and skill and at all times setting a fine example of the first-class regimental officer.’

After the war, he served in Palestine, and after 1946, with the 1st Parachute Regiment in Germany and Cyprus.

He finished his army career at the School of Land Air warfare, with the rank of Lieutenant Colonel. 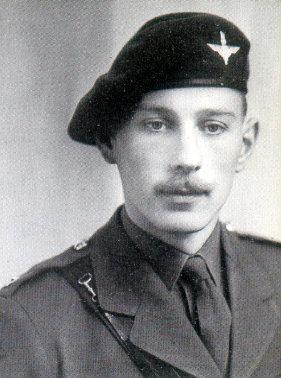