Private Alfred Victor Dann, born in Preston (Lancashire), was the son of Ernest and Clare Dann and husband of Anna Dann.

He volunteered for airborne forces in 1943 and qualified as a military parachutist on course 71 which ran at RAF Ringway from 5 to 17 July 1943. He was sent as a reinforcement to the 1st Parachute Battalion and it is believed he served with the Medium Machine Gun Platoon, Support Company, in Italy.

He transferred later to the Defence Platoon of the 1st Parachute Brigade HQ and fought at Arnhem in Operation Market Garden.

Pte Dann died on 4 October 1944, aged 30 years, and is now commemorated on Panel 9 of the Groesbeek Memorial. 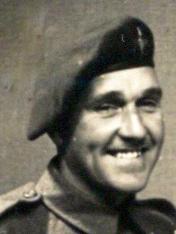