In April 2008, he deployed with B Company on Op Herrick 8 and was based at FOB Inkerman. 4 months into the tour and after the Company had suffered some heavy losses Alfie was wounded in the right leg during a Taliban ambush by shrapnel from an RPG.

After being Casevac’d back to the UK where he would undergo a number of surgeries and rehabilitation courses and made it back to his Battalion just as they were leaving for Op Herrick 13 in October 2010. This time Alfie would be serving with D Company as one of their Company Medics based out of PB1

During an operation in a village called Dactran, Alfie was struck in the helmet and daysack by a 7.62mm rounds, one knocking him unconscious. Moments later he regained consciousness and realising there were several wounded among him, he began to move up and down the line treating and carrying wounded Paratroopers to safety. He carried on to finish the tour and returned home with D Company in May 2011.

After being promoted to Lance Corporal, Alfie then transferred across to the 1st Battalion. In February 2012 he received the Military Cross from the Regiments Command In Chief HRH Prince of Wales alongside three other Paratroopers from the same Operation.

Soon after Alfie completed Junior Brecon and became a Corporal in C Company and deployed on his 3rd tour of Afghanistan in 2013 where he was stationed in Kandahar Airbase. Corporal Pope returned home after a successful tour in May 2014.

Corporal Pope went upto to ITC Catterick as a recruit instructor in January 2015 and after spending a year up at Catterick he would transfer across into the Royal Medical Corps and was promoted to Sergeant.

In November 2017, Sergeant Pope deployed to Iraq and upon returning began to struggle more and more with the injuries he had sustained in Afghanistan. After undergoing a few operation he eventually had his right leg amputated below the knee in June 2020. 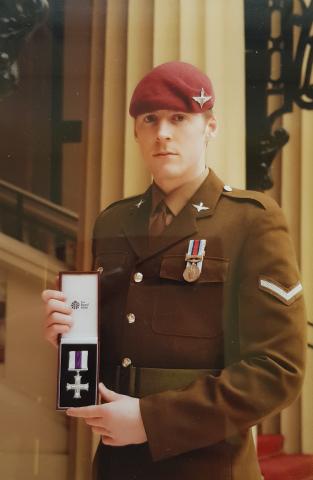