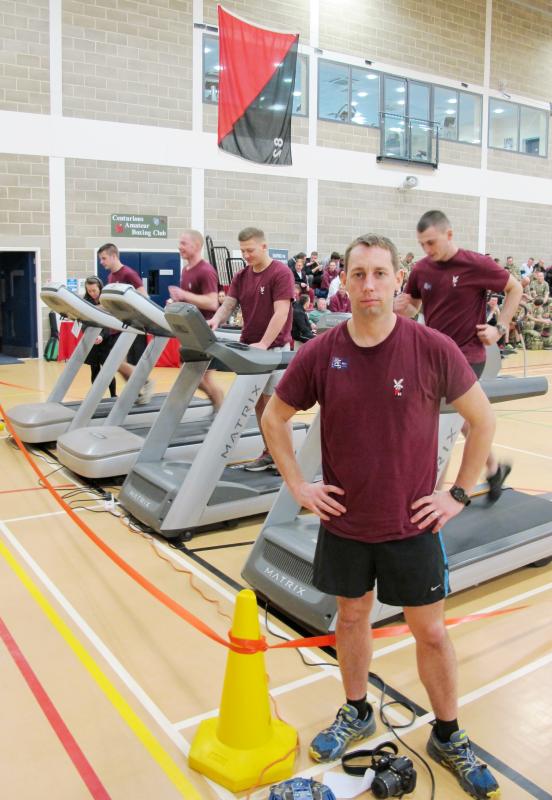 Soldiers have covered the equivalent distance from Colchester’s Merville Barracks to the top of the Eiffel Tower in Paris in just over three hours to raise money for charity.

A challenge in aid of Multiple Sclerosis charity MS-UK saw troops from 13 Air Assault Support Regiment Royal Logistic Corps (13 AA Sp Regt RLC) competing to run 112 miles to Dover, row 21 miles across the Channel, cycle 181 miles to Paris and then 1,710 steps up the Eiffel Tower in the quickest time.

The unit’s four Colchester-based squadrons were each given 10 fitness machines at the Budd VC Gymnasium today (Tue 9 Dec) to race against each other. The winners were 82 Air Assault Task Force Squadron in a time of 3 hours 10 minutes.

Sergeant Jonathan Johnson, who organised the event, said: “It’s been an enjoyable way to get the whole Regiment together and everyone’s really put a lot of effort in. I was expecting the first team to take five hours but that time was smashed!”

The challenge raised money to support MS-UK's Josephs Court centre in Colchester, with proceeds still being counted. The centre has specialist physiotherapy equipment to help people with MS build up muscle strength and tone.

Sgt Johnson said: "The Army is part of Colchester and I wanted to do a charity event that reached out into the wider community. The wife of one of our former soldiers has MS and I got to hear about Josephs Court and the work that it does for people with MS, and it seemed the perfect cause to support.”

MS-UK’s fundraising co-ordinator Sam Harper said: “We offer unique support to help people in the local community live their lives with MS, both those diagnosed and their families. It’s been great to both see the effort that the soldiers have put in to this challenge and build a relationship with the Army.”