The '2' denoted the units independent lineage (from the former 2nd Independent Parachute Brigade Signals), the '16' retained from the 1st and 6th Airborne Divisionals Signals predecessors. In spite of this change in title, the role of the unit remained the same in support of 16th Parachute Brigade Group.

The first operational deployment as 216 took place in June 1961, when a rear detachment was sent with the 2nd Battalion, the Parachute Regiment (2 PARA) to Kuwait as part of a British force sent to prevent an invasion from Iraq. The invasion prevented, the 216 detachment travelled to Bahrain and helped establish a communications link with a camp constructed in the desert near Bahrain airfield.

In 1964, 216 was deployed operationally once more. In December 1963, tensions between Turk and Greek Cypriots had reached dangerous levels. When fighting broke out in Nicosia, the UK became involved in the UN peacekeeping mission, formally the United Nations Peacekeeping Force in Cyprus (UNFICYP), sent to Cyprus. 16th Parachute Brigade Group was deployed from UK, with the Signal Squadron flying from Lyneham on 2 January 1964, to help guarantee the sovereignty of Cyprus. The Squadron soon played an important role in establishing Brigade communications from Elizabeth Camp in Nicosia. Later that year, 216 joined other units of 16 Parachute Brigade in wearing the UN light blue beret for the first time on 26 March 1964 (though they retained a maroon patch behind the UN cap badge) representing HQ Nicosia Zone.

In the mid-1960s, Squadron personnel undertook various overseas detachments, including to Bahrain, the Radfan in Aden where they toured on a rotational basis. During 1965, a further detachment from 216 joined the 2nd Battalion The Parachute Regiment (2 PARA) deployment to Borneo. On 18 October 1965 one officer and seven men deployed on an operational tour to British Guiana attached to 3rd Battalion The Parachute Regiment (3 PARA). Such constant activity meant approximately 75% of the Squadron were deployed at various periods in 1965-7. This policy achieved the maximum number of men gaining operational experience, with the Squadron reaching its full compliment for the first time in 10 years.

1965 was also significant at home. On 1 February 1965, the Squadron left Elles Barracks, Farnborough and moved to the new Arnhem Barracks, at Montgomery Lines. Earlier that year in January, 16 Parachute Brigade dropped the word group from its title, and so necessitated the eventual redesignation of the Squadron as 216 Parachute Signal Squadron under the command of Maj MU Ryan, who had arrived in July 1965.

Furthermore, during 1965-66 the Squadron was reduced in strength following various manpower cuts. This resulted in some long serving members of the unit either leaving the Army or being posted. The structure of the Squadron changed slightly during this period and now consisted of a Communications Troop, a Radio Troop, a Support Troop and overseas detachments such as Bahrain and British Guiana.

Quieter years from 1967-71 were punctuated by an aborted deployment to combat the Troubles in Northern Ireland and civic duties, such as guards duties at the Bank of England in January 1971.

On 8 February 1971, 16th Parachute Brigade HQ was ordered to deploy to Northern Ireland. The 216 Squadron advance party moved on 9 February and the main body moved during the next two days. The move was via Liverpool and the Belfast Ferry and the Squadron, with Brigade HQ, took up residence in the empty Pinehurst Factory in Lurgan.

The Squadron provided communications for the Brigade throughout its area of responsibility which covered the whole of the Province less Belfast and Londonderry. Communications involved Pye Westminster commercial pattern radio and Larkspur military radio nets. Operators quickly settled to 24 hour shift working. A radio and rebroadcast chain of stations from Londonderry to Rostrevor with A41 sets working between stations was eventually established. Squadron personnel also took part in various patrols on occassion. A number of men were attached to 1st Guards Independent Parachute Company at Newry and gained experience in searching and riot control. The short tour in Ireland came to an end in June 1971, when the Squadron handed over to 19th Airportable Brigade HQ and Signal Squadron and returned to Arnhem Barracks.

After returning from Northern Ireland, the Squadron settled back into the Aldershot peacetime routine. Squadron personnel were heavily involved in the rescue operation at HQ 16 Parachute Brigade following the IRA bombing of the Officers' Mess on 22 February 1972. The Squadron continued to provide individual reinforcements for operations in Cyprus, Belize and Northern Ireland throughout the 1970s.

The Squadron was reorganised in 1973, a structure which was retained until the demise of the unit, though by 1976, the Squadron was preparing for their change of role following the Army Restructuring Plan 1975. The full Squadron parachute role ended in March 1976.

Reorganisation, an increase in inter-service personnel intake and the withdrawal of their maroon beret over the following two years cemented their new role. In 1981, the unit was further redesignated as 1st Infantry Brigade Headquarters and Signal Squadron (216) and lost its Airborne status. Despite these changes, the Airborne status would not be lost forever.

In 1982, members of the Squadron travelled to the South Atlantic alongside Airborne troops, to take part in Operation Corporate to recapture the Falkland Islands. The successes of the operation helped prompt a reevaluation of the need for Airborne Forces and shortly afterwards, the parachute role was reinstated to the British Army. 5 Airborne Brigade Headquarters and Signals Squadron (205) came into being in November 1983. In December that year, 1st Infantry Brigade Headquarters and Signal Squadron (216) relinquished their Airborne associations to 205 Signal Squadron and assumed the number 215.

It was not until the early 1990s that the 50th anniversary of Airborne Signalling prompted the reinstatement of the number '216' in recognition of its historical significance. 205 Signal Squadron, still part of 5 Airborne Brigade, was re-titled in October 1991 as 216 Parachute Signal Squadron.

When NATO troops were sent to Kosovo in June 1999, 216 Squadron arrived amongst the first troops into the country. Subsequently, part of 24 Airmobile Brigade Headquarters and Signal Squadron (210) deployed into theatre in support of 101 Logistic Brigade. As this was happening, as part of the Strategic Defence Review 16 Air Assault Brigade was about to form from various elements of 5 Airborne Brigade and 24 Airmobile Brigade. Correspondingly, elements of the two brigade signal squadrons formed up on 1 September 1999 in both Colchester and Pristina, Kosovo as 216 Signal Squadron.

216 Squadron was soon firmly established as part of the new 16 Air Assault Brigade, and over recent years has undertaken deployments to both Iraq and Afghanistan.

In 2006 following an arduous tour of Afghanistan the Squadron saw the Parachute title restored in an official ceremony conducted by HRH Princess Ann, redesignated as 216 (Parachute)Signal Squadron.

216 Squadron were redeployed back to Afghanistan for Op Herrick XIII in Autumn 2010. 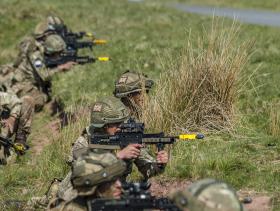 From first aid to fire and manoeuvre, the soldiers of 216 (Parachute) Signal Squadron have competed against each other on Exercise Mercury Dagger.

Jonathan Thompson said:
After 216 was mothballed and we became 6 Field Force,
Two Rear Link detachments and 2 TACP Parties continued in the Para role supporting the In role Battalions deploying with them on all tours as part of the battalion. these where
565 (Para) Rear link Detachment and 566 (Para) Rear link Detachment
and 613 and 614 TACP.
565 deployed down to the South Atlantic with 2 Para and 566 with the 3 Para.
Add your comment