Zdzislaw Galasiak was born on 27 January 1922 in the small Polish town of Sochaczew to the west of Warsaw, capital of Poland. He was the middle child of Walenty and Eleonora (nee Ostrowska).

Whilst studying in the town of Pionki, Zdzislaw stayed with his aunt and her family. Back in Sochachew he had a good Jewish friend called Pinkus and not long after the outbreak of war, the pair decided to find out what the USSR was like! They left Sochaczew and visited the Jewish community Pinkus knew in Warsaw. The two friends travelled to Odessa on the Black Sea in the USSR and to Abkhazia in the USSR where they found employment. The people in this region were hospitable but they left because of the NKVD (Soviet Secret Police). On the way back to Poland through the Ukraine, USSR, conditions were appalling and people were starving. Zdzislaw and Pinkus spent their last night together in a Windmill at Breast-Litvosk on the border between Nazi and Soviet controlled Poland. The next day they were separated and sent to different Gulags (labour camps).

Zdzislaw was released from the Gulag for the purpose of joining the Polish Armed Forces. On 13 September 1941 he enlisted in the Polish Army being organized on Soviet territory. He was posted to the 7 Infantry Division. Together with Polish Army Units he crossed the Soviet-Iranian border and was evacuated to Iran and thereby became under British command with effect from 1 April 1942.

Via Iraq Zdzislaw was transferred to Palestine and arrived there on the 8 May 1942 and was posted to the Reserve of the Commander-In-Chief, Polish Army, Middle East. He was transferred to 8 Rifle Battalion, 3 Carpathian Infantry Division, 2 Polish Corps, 8 British Army on 1st June 1942.

Then he was transferred to 3 Rifle Battalion, 3 Carpathian Infantry Division, 2 Polish Corps, 8 British Army on 16 November 1942. On the re-organisation of the Polish Army in the Middle East, Zdzislaw was assigned to serve in the Polish Forces under British Command in the UK and was transferred there. Time was spent on the Isle de France troopship carrier sailing to South Africa and Rio de Janeiro before arriving in the UK on 21June 1943, where he was posted to 3 Parachute Battalion, 1 Polish Independent Parachute Brigade. He volunteered to become a Para. Zdzislaw trained at Largo, Fife, Scotland and Manchester and was also stationed at Stamford, Lincolnshire. He visited the latter with his family in the 1980s.

Zdzislaw took part in Operation Market Garden 19-20 September 1944 to 14 October 1944. The enemy was ready and waiting for the Brigade! He also served as part of the Allied Occupation Forces of Germany from 1945 to 1946. On 12 December 1947 Zdzislaw enlisted in the Polish Resettlement Corps (PRC) and stayed until it finally disbanded on 30 September 1949.

Jimmy married Violet in April 1953 and had two daughters Halina and Michele. Jim had a career in the television industry spanning 30 years and retired from the Planning and Installation department at London Weekend Television on his 65th birthday.

Jim returned to Driel, Arnhem during the summer of 2007 with his daughter Michele and two grandchildren, Nicole and Stefan, he even met some of the children he liberated in 1944. In the hotel where he was staying another guest overheard that Jim had been a Polish Para at Driel in 1944 and left a note simply saying: “I overheard you at the desk. Thank you for letting us be born in freedom.” The Dutch liked meeting a veteran of Operation Market Garden and made sure Jim signed the Visitors Book in all the different Museums he visited. 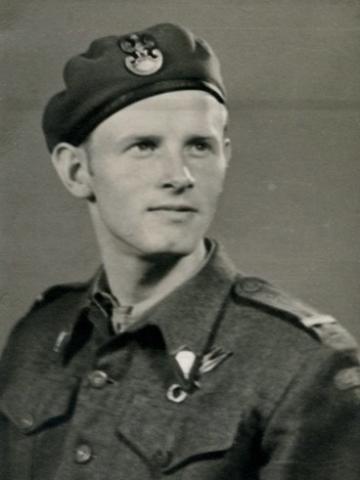