He had enlisted into The Wiltshire Regiment on the 6 January 1939, and was serving in the Middle East in 1943, when he volunteered for Airborne Forces.

In September 1943 the 156 Parachute Battalion, along with other elements of the 4th Parachute Brigade of the 1st Airborne Division, took part in Operation ‘Slapstick’. This was a naval landing at the Italian port of Taranto. After landing the Battalion advanced north towards the town and airfield of Gioia del Colle. On the 15 September, at 0700 hours, Major. Willys, the Officer Commanding ‘C’ Company, went out on a patrol with the Commanding Officer, the Intelligence Officer and the Anti-Tank Platoon Commander to an Observation Post a ¼ mile short of Gioia del Colle, to study the surrounding area.

It is very likely that Pte Alexander was one of the missing men.

He was repatriated, but died on the 3 July 1945, just a few weeks after getting back home, in a canoeing accident.

From the Western Daily Press and, Bristol Mirror, Saturday, July 7, 1945.

Private William Thomas Alexander, 23, of the Parachute Regiment, who lived at Eastrop, Highworth, Wiltshire, was seen paddling a canoe in the River Isis [Thames] at Oxford, on Tuesday. He was sitting in the stern with the front of the craft right out of the water. Sometime later when a canoe was seen floating upside down, a crew of the Oxford University Naval Division recovered the body. At the Inquest yesterday a verdict of “Found drowned” was returned.

The Death Certificate states, under When and Where Died: ‘Third July 1945. River Cherwell, Oxford’. Then under Cause of Death: ‘Drowning, there being no evidence to show how the deceased got from the canoe in which he had been riding, into the water’.

He is now buried in Highworth Cemetery, Wiltshire in Plot 1128. He was 23 years old. 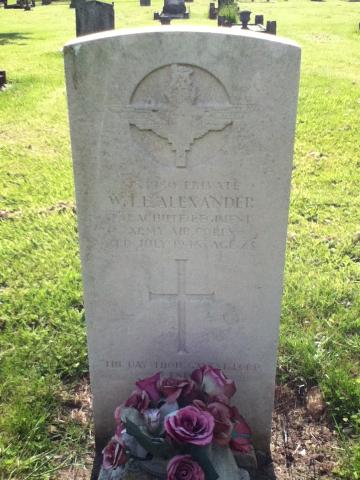