William Arthur Ramsay, who was born in 1923, served as a machinist prior to enlistment into the Argyll and Sutherland Highlanders in September 1941. He was sent on attachment to No 8 Infantry Training Centre at Queen’s Barracks Perth for two months basic training.

He served with the Highlanders until late 1942, volunteering for the airborne forces because of the extra pay!

He attended Parachute Training Course 34 which assembled at Hardwick for preparatory ground training under RAF instructors on 12 October 1942. The course intake comprised of 186 men to provide reinforcements for the Parachute Brigade and moved to RAF Ringway on 22 October. They completed the required jumps to qualify by 27 October.

On qualifying as a military parachutist William Ramsay was posted to the 5th (Scottish) Parachute Battalion and embarked for North Africa in April 1943.

From North Africa he moved with the battalion to Italy and jumped into Southern France in August 1944. He was also part of the Athens occupation force during the winter of 1944-45.

By Harvey Grenville with the assistance of Jane Ramsay 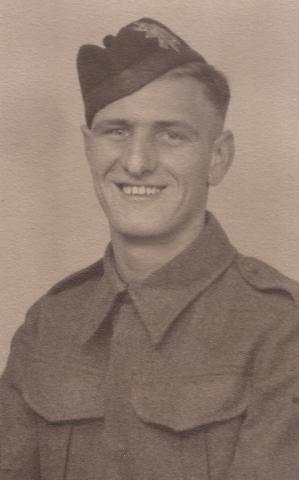 Brian Varney said:
I would have loved to have met this man, just to shake his hand for being the comrade of my Uncle William Varney during WW2. I salute you William.
Sheila Jackson said:
Me too, Brian. William Varney was one of my mother's cousins, so mine too. These brave men!

Thank you for putting this photo on this site. I never thought I would get a photo of my cousin, William. They look as tho' they were good friends.
Add your comment