Private William Joseph Ralphs enlisted to the Cheshire Regiment at Stockport on 1 May 1939 at the age of 22.

Following transfer to the Middlesex Regiment, he joined the British Expeditionary Force (BEF) in France late-Autumn 1939. After spending the early part of 1940 in North West Europe, Pte Ralphs was one of over 300,000 soldiers evacuated at Dunkirk in late May and early June 1940. Ralphs returned home on 31 May 1940.

Pte Ralphs first saw action when 2nd Parachute Battalion was deployed to Tunisia, North Africa during Operation Torch. He dropped with the Battalion at Depienne on 29 November 1942. After a successful drop, the Battalion soon found themselves heavily outnumbered, over 50 miles behind enemy lines. Despite this, they were able to fight their way back to Allied lines. Pte Ralphs continued to fight with the Battalion in Tunisia until Spring 1943.

Pte Ralphs finally returned with the rest of 2nd Battalion to the UK in December 1943. After Christmas 1943, the New Year heralded an intensive period of training exercises and in the summer months, numerous abortive operations before 1st Airborne Division was finally deployed into North West Europe for the first time in September 1944.

Despite this, Frost’s men managed to hold the Bridge for four days from houses and other buildings near the Bridge against a ferocious bombardment, which almost completely destroyed their HQ. During the action, Pte Ralphs was recommended for the Military Medal for his actions. However, in common with many others at Arnhem, Ralphs’ actions were not formally recognised as the award was turned down.

William Ralphs was eventually captured as a Prisoner of War after he had held out for seven days on 24 September 1944. He was soon sent to Stalag IVB, at Mühlberg on the Elbe in Germany, where he stayed until it was liberated by the Russians in early 1945.

After his release, William rejoined the Army Air Corps, and eventually left the Army on 9 March 1946 following 6 years, 313 days service. 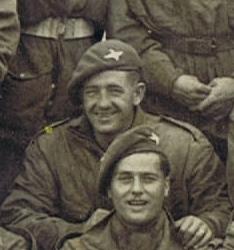