William Robert Nicks enlisted into the Oxford and Buckinghamshire (Ox & Bucks) Light Infantry before volunteering for airborne forces in 1943 while serving as a Corporal.

He qualified as a military parachutist on course 78 which ran at RAF Ringway in September 1943. The course instructors' notes record 'Initially nervous but keen and determined.’ He was posted to the Holding Company and then to the 4th Parachute Battalion.

William Nicks served with the 4th/6th Para Bn until May 1948 and  transferred back to the Ox & Bucks having reached the rank of Sergeant . 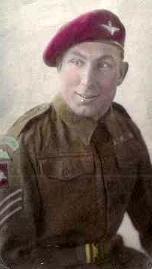