William "Bill" Larder joined the RAF on 21 Aug 1941 as he was not allowed to join the Army due to his reserve occupation. After being in the RAF for just under 12 months, (training as an air gunner) he applied to join the Army and was assigned to the Wiltshire Regiment in September 1943. His Dad, a first World War Army Veteran, bought him a beer to celebrate his move to the Army.

Bill volunteered for service with Airborne Forces and attended his first Para course early in 1944. Unfortunately, he contracted measles during the course and was sent to hospital. Once recovered he was back on the Para course but by this time all his mates had qualified and been sent off to their units, Bill never saw any of them again. Bill eventually qualified as a parachutist on RAF Ringway PTS course number 108. Which ran from 19 to 31 March 1944. His instructor noted "Average performer-- Morale good". After completing this course, Bill was posted to 11 Para.

Bill recalled his jumps from the Whitley Aircraft, an old bomber that had outlived its use and had been passed to Airborne Forces for Parachuting. For parachuting, the rear turret was removed and a circular aperture fitted with hinged doors was cut in the floor. Sitting with their feet in the hole, parachutists would launch themselves through the exit on the Parachute Jump Instructor's command. The Whitley was well known by the troops. As the hole was nearly three feet deep inexperienced parachutists were liable to smash their face on the opposite face of the floor opening, an event known as "Ringing the Bell". The effect of ringing the bell was dependant on the strength of the head strike but included bruising, broken noses, black eyes, and concussion as many Ringway students will testify!

On the 18 September 1944, Bill jumped on the second wave into Arnhem. The first wave had landed the previous day but they had heard nothing from them and what lay ahead. Bill remembers vividly the sound of German MG fire on the DZ, close by and over his head ‘something I will never forget’ he said. They fought in and around the houses in Oosterbeek for day’s until finally the call came for them to pull out.

With five others, Bill made his way to the banks of the Rhine. There were no boats to be seen and unable to swim they were stuck. A little while later a small boat drifted close by, which they managed to pull ashore. It was already leaking and had no oars but better than the alternative, so they all jumped aboard and started paddling with their hands to the other side. It took a while and all the time the boat was taking on water as they neared the opposite side. Just short of the bank, the boat finally gave up and sank beneath them, forcing them to scramble ashore as best they could. They had all made it and once ashore they set off up the bank away from immediate danger.

Returning to the UK, Bill later took part in a Victory Parade in Melton Mowbray, nearby where they were billeted prior to Op MARKET GARDEN. The parade was to celebrate the award of the Victoria Cross to Private Richard Henry Burton (Duke of Wellington's Regiment) for his gallant action in Monte Ceco, Italy.

In late 1944, following the disbandment of 11 Para, Bill moved to 3 Para. As a member of the Battalion he recalls choosing to play rugby instead of football, the reason for this was very simple. The football players got to visit the Sergeants Mess after their matches but the rugby players got to go to the Officers Mess after theirs. His service in 3 Para later saw him serve in Palestine, from 12 October 1945 to 12 April 1946.  Bill left the army in 1946.

Bill was married to Shelia in Melton Mowbray 1 October 1945

Bill has not been back to Arnhem since the battle in September 1944.

Created with information supplied by Bill Larder, his family and Paul Raison. 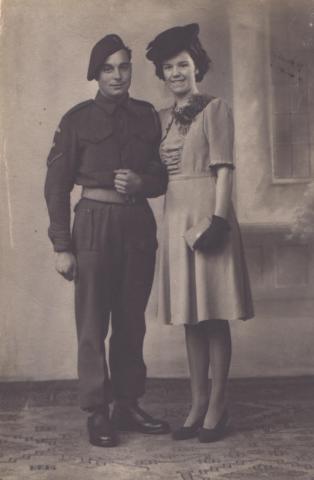