Pte Bill Porrill was the son of Arthur and Margaret Porrill, of Rusholme, Manchester.

He was enlisted into The King's Regiment (Liverpool) and immediately volunteered for airborne forces during World War II.

Bill qualified as a military parachutist on course 150 which ran at RAF Ringway from 24 January to 8 February 1945 and was later posted to 13th (Lancs) Parachute Battalion.

He was deployed for Operation Varsity in March 1945, and took off from Whethersfield airfield to parachute with the battalion onto Drop Zone B.

He was killed on the first day of the operation and the battalion war diary records that the majority of casualties suffered by the unit were due to heavy enemy anti-aircraft fire and airbursts brought down on the DZ. 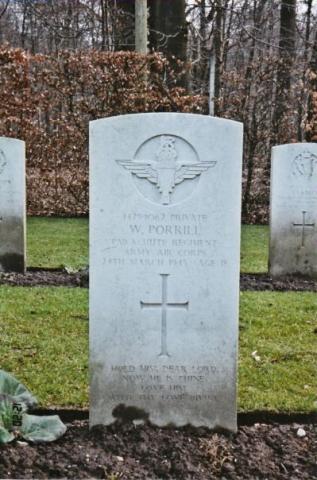