Captain McCracken, 29 Commando Regiment Royal Artillery, was in command of an Artillery and Naval Gunfire Forward Observation Party grouped with B Company 3rd Battalion Parachute Regiment during the period 13-14 June 1982. During the attack on Mount Longdon in the early hours of 12 June Captain McCracken consistently brought down artillery and naval gunfire safely in very close proximity to his own troops allowing them to manoeuvre whilst still maintaining contact with the enemy.

Throughout this period he and his party were continually under heavy enemy small arms, mortar and artillery fire. Much of the time the Company Headquarters with which Captain McCracken and his party were co-located were involved in the small arms fire fight and in this fire fight Captain McCracken made a significant personal contribution, accounting for several enemy dead.

Captain McCracken showed outstanding personal courage whilst carrying out his duties in a most professional, calm and competent manner. His control of artillery and naval gunfire undoubtedly accounted for many enemy casualties and greatly assisted in minimising our own. His determination, professionalism and courage were an example to all. Always in the thick of the fight, he made a significant personal contribution to the success of the mission and to the minimising of casualties to the Battalion.

During the night of 14 June Captain McCracken and his party were regrouped with 2nd Battalion The Parachute Regiment for their attack on Wireless Ridge. Throughout this attack Captain McCracken was sited in an exposed OP position on Mount Longdon. Under constant enemy mortar and artillery bombardment Captain McCracken continued to bring down accurate and effective naval fire. This fire resulted in the successful neutralisation of at least one company objective and the harassment of enemy gun positions. The application of indirect fire played a major part in the success of the Battalion's attack, the minimising of our own casualties and the eventual surrender of the enemy. Captain McCracken's high courage and professional skill were in the highest tradition of the Royal Artillery.

By kind permission from The Pegasus Journal 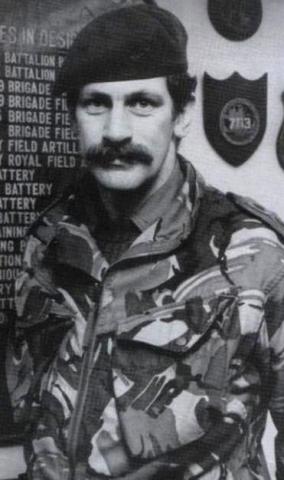 Bill Yates said:
Very sad to read of Willy's passing. I served with him in IFOR in 1996 an couldn't rate him higher.
Add your comment