Private Mackay volunteered for airborne forces from The Lowland Regt in 1942.

Pte ‘Bill’ Mackay successfully completed the selection course at Hardwick Hall, before being sent to RAF Ringway on parachute course No 28. This ran from 21 to 28 September 1942. He was then posted to S Company, The 5th (Scottish) Parachute Battalion (5th Para Bn).

Pte Mackay served in North Africa and took part in the seaborne landings in Italy in September 1943 and remained in Italy with the 5th Para Bn as part of the re-designated 2nd Independent Parachute Brigade..

He jumped into Southern France in August 1944 and was part of the Athens occupation force in the winter of 1944-5.

After the war Pte Mackay served in Palestine until demobbed in December 1946.

Pte Mackay re-enlisted into The Territorial Army in May 1947.

‘Bill’ emigrated to Australia and has participated in the Anzac Day March in Sydney for the past 40 years, recently proudly accompanied by his grandson, Brendan also an airborne soldier. 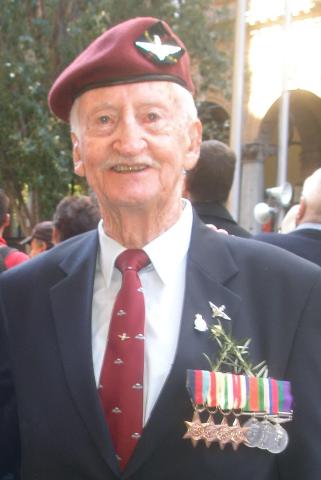