Sergeant William MacFarlane was the son of David Lindsay MacFarlane and Jessie Fraser MacFarlane, and came from Glasgow.

He served as a pre-war regular soldier in the 1st Battalion, Royal Scots, and later volunteered for airborne forces during World War II on the formation of No 1 Parachute Brigade in 1941.

After completion of the selection course at Hardwick Hall, he was posted to the 2nd Parachute Battalion (2nd Para Bn) then in the process of forming up, and assigned to C Company (C Coy). Along with other members of C Coy he attended the first parachute training course for personnel of No 1 Parachute Brigade at RAF Ringway in November 1941.

Shortly after returning from their advanced training in January 1942, C Coy began intense training and preparation for the Bruneval Raid, a daring parachute operation into enemy occupied France to capture components from a German Würzburg radar installation.

Sgt MacFarlane was a member of Hardy section for the raid and flew in the Whitley aircraft numbered Z9425 flown by Sergeant Hughes of the RAF. They landed successfully on the assigned drop zone and moved to the radar post to provide close protection to the Royal Engineers and Flt Sgt Cox of the RAF as they dismantled the radar.

Later that year Sgt MacFarlane sailed with the 2nd Para Bn to take part in the North African campaign, and some two weeks after arriving in Algiers was deployed from Maison Blanche airfield for a snap operation to destroy German aircraft and positions at Depienne and Oudna, some sixty miles behind enemy lines.

Sgt MacFarlane died during the Depienne/ Oudna operation on 30 November 1942, aged 29 years old. He is now commemorated on the Memorial at Medjez-el-Bab War Cemetery, Tunisia. 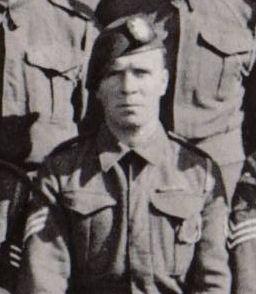