Bill was born in  Southwark, London. Only son of Edith and William.

He married Joan in 1952. Joan had served with the RAF and used to be one of the radio room girls talking to the fighter pilots.

A keen sportsman  (school captain of swimming, football and cricket) he had joined the equivalent of the cadets/TA before the start of the Second World War and lied a little bit about his age to get in early - much to his mother’s disapproval.

As he was too young to serve overseas at the start of the War, and being in the Royal Artillery, Bill was posted to Dover in 1940 in an anti aircraft battery. There he saw a lot of action in what was known as "Hell Fire Corner". His battery was on Shakespeare Cliff.

His next significant posting with the RA was to Sheffield in very late 1940, where his battery were tasked with defending the city in the Sheffield blitz.

After that he was posted to Persia and Iraq. Again with the RA. This was it was  then feared the Germans might seize the oilfields and there was a pro Nazi politician in Persia threatening to make life hard for the Allies.

His time in the Middle East theatre was not always his favourite "a combination of sand heat and dirt mixed up with burning rubber smoke while being bombed" he remembered.

Around mid 1943 he went to Officer Cadet Training Unit (OCTU) in Egypt and was commissioned initially into the RA.   He quickly seized his opportunity to join the Paras. Bill was proud of his  Welsh family heritage, which is why he joined 6 (Royal Welch) Battalion of the Paras. Once with the Paras he went straight to Italy, where he remained for the rest of the War. His time in Italy included Monte Cassino.

After the war he served as a parachute instructor at Shornecliffe Barracks before leaving the army in 1946. However he stayed on the Officer Reserve until aged 55.

In civilian life he ultimately became the MD of a subsidiary of Alcan - now Rio Tinto. He also became a Freeman of the City of London.

Created with information and images kindly supplied by Martin Roberts. 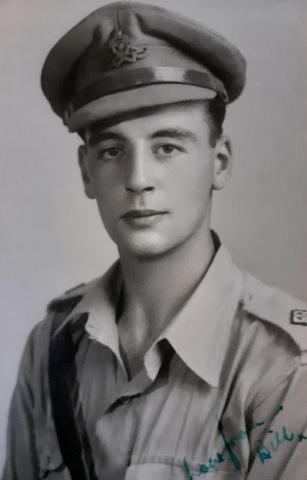