Trooper Edmond was the son of William and Joanna Edmond, of Musselburgh, Midlothian and husband of Janet Edmond, also of Musselburgh.

Tpr Edmond was shot through the back by a German sniper on the first day of the operation after landing by glider as elements of the squadron tried to advance to Arnhem through Wolfheze.

Lt Bowles and Sgt David Christie ran out from the edge of woods under enemy fire to drag him to safety. He was laid on a stretcher on Christie's jeep and taken to the Regimental Aid Post. By now Tpr Edmond was drifting in and out of consciousness. Comrades tending him realised he had been mortally wounded through the left lung. Tpr Edmond also realised this and told Sgt Christie 'Jock, I'm dying. Tell my wife I love her and go and see her for me.' He lost consciousness again and later died of his wound.

Trooper William Edmond died on 17 September 1944, aged 27 years, and was initially interred in a temporary field grave in the garden of Number 9 Duitsekampweg at Wolfheze. He is now buried at Oosterbeek War Cemetery, Arnhem.

If you are part of Trooper Edmond's family and would like to complete this biography, you can apply to the curator to do so. To do this you will need to become a member of ParaData and select the 'friend or family member' option on the registration form. If you would like to find out more about becoming a member please visit our registration page. 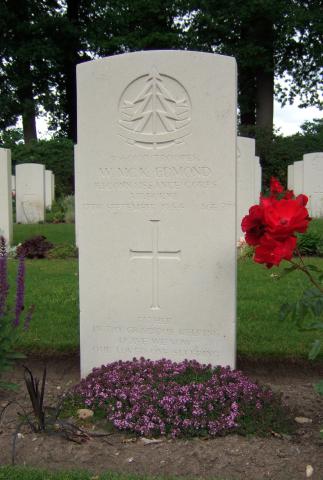