William Lannery had enlisted in the Royal Scots Fusiliers on 3 November 1933 and was still serving with them when he volunteered for airborne forces in 1942.

He attended parachute course No 8, at RAF Ringway, near Manchester, in February 1942.

Later he would be posted to the 1st Parachute Battalion, March 1945, and take part in the Operation Doomsday in Denmark in May 1945.

He was awarded an MID for operations in Italy in 1943, whilst serving with HQ-Company, 4th Parachute Battalion. The award being gazetted on 24 August 1944.

He was awarded an MID for ‘Operation Dragoon’, Southern France in August 1944, whilst serving with C-Company, 4th Parachute Battalion, as an Acting Corporal. The award being gazetted on 22 February 1945.

He was discharged from Regular Army Service on 6 October 1945.

In March 1955 he was posted to the Independent Parachute Signals Squadron and between that date and May 1957 he served with them in Malaya.

In May 1957 he returned to the 1st Bn, The Parachute Regiment, but in April 1958 he joined 22nd Special Air Service for 8 months in Malaya.

In November 1958 he returned to 1 PARA, with whom he remained until his discharge from the Army in January 1960.

His medals are on display in the Airborne Assault Museum, Duxford. 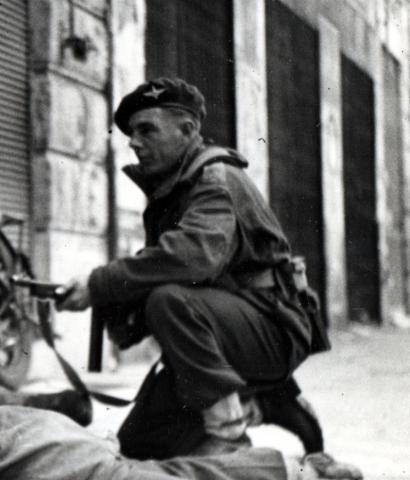