Corporal William Alexander Kelly was the son of Henry and Helen Gold Kelly, and the husband of Audrey Joan Kelly, of Ely, Cambridgeshire. He served with 591 (Antrim) Parachute Squadron, Royal Engineers and took part in the D-Day landings to Normandy, during Op Overlord.

On the night of 5-6 June 1944, Corporal Kelly flew to Normandy onboard Short Stirling EF 295 with a parachute stick of Airborne Royal Engineers. The aircraft crash-landed near the village of Grangues, in Normandy.

Four men died as a result of the crash, but seven others survived before being disarmed and taken prisoner by German forces in the area. Although the circumstances are unclear, at some stage during the night Cpl Kelly, along with L/Cpl Branston, L/Cpl Fraser, Spr Wolfe, Spr Wheeler and Dvr Thomson, all of 591 (Antrim) Parachute Squadron, were shot. Spr Guard, part of the Royal Engineers contingent of HQ 6th Airborne Division, was also killed.

The victims of this incident are now recorded on a memorial, close to the village where the shooting took place.

Compiled with assistance from Fred Gray 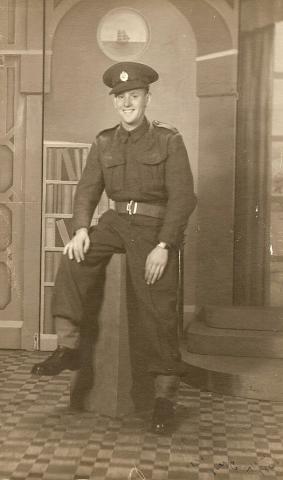