Corporal William John Scudamore was the son of William John and Dora Millicent Scudamore, of Lee, London. He applied, and was accepted, for service with the newly formed Glider Pilot Regiment in 1942. In addition to meeting the mental and physical standards required of RAF aircrew, glider pilots were required to be ‘Total Soldiers’ and fight on the ground with the airborne soldiers they transported. This required soldiers of high calibre with a flexible disposition, intelligence, initiative and discipline.

Corporal Scudamore died at the age of 19 in a training accident while attending No 16 EFTS RAF Burnaston on 8 May 1942. He is believed to be the first member of the Glider Pilot Regiment to die at the training school. He is now buried nearby at St. Wystan’s Churchyard, Repton. 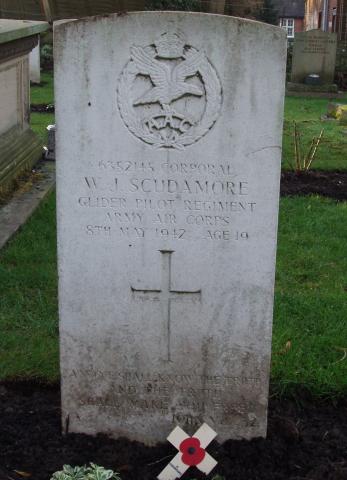