William ‘Bill’ John Cunningham was the son of Isaac and Margaret Cunningham, of Warrenpoint, Co Down, Northern Ireland.

He enlisted into The Royal Ulster Rifles (RUR) and was serving as a Company Sergeant Major when the 1st Battalion RUR was redesignated as an air landing unit, deployed primarily by gliders, as part of 1st Air Landing Brigade in late 1941.

‘Bill’ Cunningham volunteered for parachuting training and attended RAF Ringway on course 14, which ran at RAF Ringway from 25 May to 4 June 1942, when Piper William Sands was killed as a result of entanglement with his rigging lines.

He later transferred to 9th Parachute Battalion and served as Regimental Sergeant Major to Lt Col Otway, who was a former officer of 1st Battalion RUR.

The battalion was tasked to attack and neutralise the Merville Battery which threatened the main beach landings in Normandy, June 1944.

Having achieved this objective the battalion held defensive positions at St Come. It then took up positions at Le Mesnil on 13 June and ‘Bill’ Cunningham is known to have taken out a night patrol shortly after, on 14/15 June. 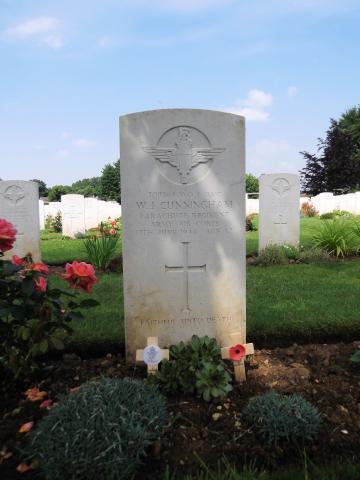