William John Austin was born in 1925 in Epping.

Private Austin volunteered for The Parachute Regiment from the Kings Own Yorkshire Light Infantry, attending Parachute Training Course number 134 at RAF Ringway, from 16 September to 6 October 1944.

He was posted to 7 Platoon, C Company, 8th Parachute Battalion, and in December 1944 was sent out to the Ardennes.

Pte Austin returned to England in early 1945, and on 24 March parachuted into Germany for Operation Varsity. On the 28 March he was wounded in the leg by shrapnel, and taken to a field hospital. Pte Austin returned to his unit after eight days, who were by this time advancing into Northern Germany.

After the War ended, Pte Austin returned to England where he was part of a company that toured East Anglia with a film crew, doing jump scenes that were later used in films.

In August 1945 Pte Austin was sent to Haifa in Palestine, spending two years in the Far East before returning home in 1947. He was demobilised in September 1947, and worked as a stonemason and later as a mechanic.

He was elected Branch Standard Bearer for the Chelmsford and District branch of The Parachute Regimental Association in 1983, and paraded the Standard at events in the UK, Europe and America. 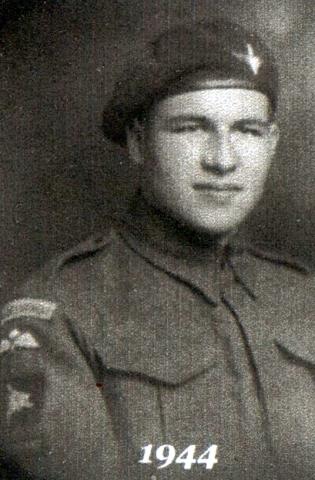