William Garibald son of Jack and Mary Garibaldi and husband of Doris Muriel Garibaldi, of Brighton, Sussex, enlisted into the Royal Sussex Regiment.

He volunteered for airborne forces, when The 10th Parachute Battalion (10th Para Bn) was formed from the 2nd Battalion The Royal Sussex Regiment at Kabrit in the Suez Canal zone in January 1943.

Acting Corporal Garibaldi was Mentioned in Despatches in recognition of gallant and distinguished services in the Middle East, it was published in the London Gazette on 13 January 1944.

Lance Corporal Garibaldi took part in the Battle of Arnhem, during Op Market Garden with 10 Platoon, B Company, 10th Para Bn. On 20 September he was wounded while in a universal carrier with Major Charles Ashworth. It is not clear whether they died the same day or the next. Both are listed as dying 20/21 September 1944, L/Cpl Garibaldi was 27 years old. He was given a field burial in Onder de Bomen General Cemetery by local Air Raid Wardens in September/October 1944.

L/Cpl Garibaldi was again Mentioned in Despatches this time posthumously in recognition of gallant and distinguished services at Arnhem, reported in The London Gazette on 20 September 1945.

He is now buried at Oosterbeek War Cemetery, Arnhem having been reinterred there on 24 August 1945. 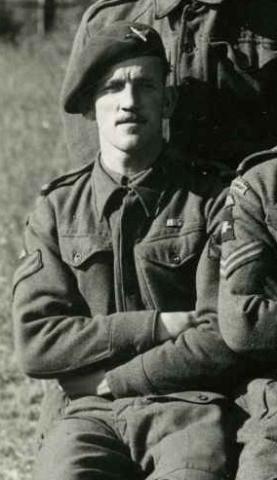