My father joined the Army on 1 July 1935 and after basic training went to Palestine in October 1936 as part of the Essex Regiment (which later became part of the 8th Army, 7th Division).

Later in January 1938 he went to Egypt but was posted back to Palestine in July 1938. During these stays in Palestine, he made many friends in Haifa and returned to Egypt on 29 September 1938, where he was stationed at the outbreak of WWII. Between 24 January 1940 and 10 October 1941 he served in Sudan, Iraq and Syria before returning to Egypt to take part in counter attacks against Rommel's Afrika Corps and finally El Alamein.

He joined the Army Air Corps (The Parachute Regiment) in May 1943 but remained in Egypt until August. He then went to Tunis and later took part in the Italian landings at Taranto in September 1943 before moving up to Bari until his return home in December to a camp near Oakham, Leicestershire. At a later date he also went to Chesterfield (Hardwick Hall) but I do not know when.

During a training jump he landed in a tree injuring his leg and knee, around the beginning of June 44. In my father words this injury "saved my bacon", as all the lads he had trained with were sent out to Arnhem where many lost there lives. As far as I know he remained at home until the end of the war presumably because of his injuries. 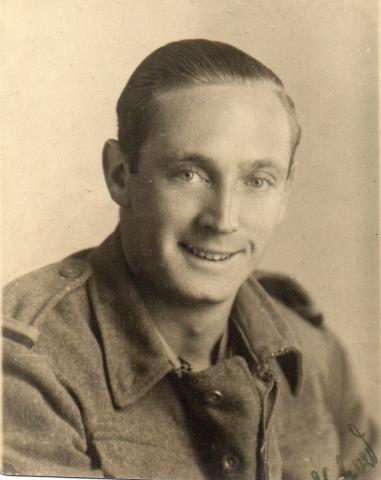