Corporal ‘Bill’ Harold volunteered for The Parachute Regiment from the Royal Artillery, and attended parachute training course number 110 at RAF Ringway between 3 and 14 April 1944. His course report stated that he was a ‘Good NCO. Good work. Average performer’.

Cpl Harold was posted to the Army Parachute Training Company, based at Bulford.

On 6 June 1944, Company Sergeant Major Instructor Harold jumped into Normandy with the 9th Parachute Battalion, as part of a force to destroy the defences at Merville Battery.

Company Sergeant Major Instructor Harold, in the company of Major Smith and CSMI Miller, made it to the battery, but was wounded in both arms. He was left with other wounded men at a farm nearby, and was made a prisoner of war.

Bill served with the army for some years after the War, and attained the rank of Captain.

By Rebecca Blackburn with information supplied by Neil Barber. 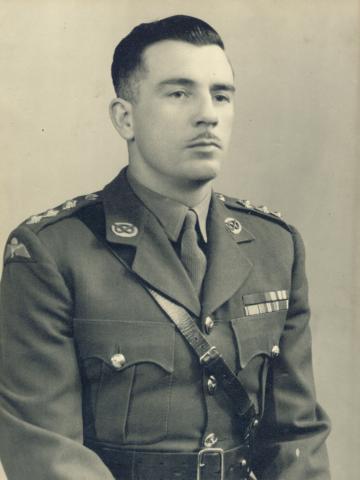 Helen Carlin said:
My late father, Gerald Carlin, served with Bill Harold and spoke very,very fondly of him. My father often wondered how he had fared after the war.
Add your comment