William George Adams was the son of Ernest Walter and Ethel Adams, Arrington, Cambridgeshire although he resided in London (his place of birth) prior to enlistment into the Army.

He originally served in the 1st Battalion The Devonshire Regiment and was on a garrison tour in India in 1942 when he volunteered for the newly formed-up 151 Parachute Battalion. He attended parachute course No 17 which ran at the Air Landing School New Delhi, RAF Willingdon, in April 1942.

This was the unit which became 156 Parachute Battalion and went via Palestine, North Africa and Italy to Arnhem, in 1944. On its return to the UK, in December 1943, Private Adams was posted to the Airborne Forces Depot and School at Hardwick Hall.

Pte William Adams died in an accident on 2 July 1944, aged 28 years, and is now buried in a joint grave at Deptford (Grove Park) Cemetery, London.

Image and Profile by Bob Hilton 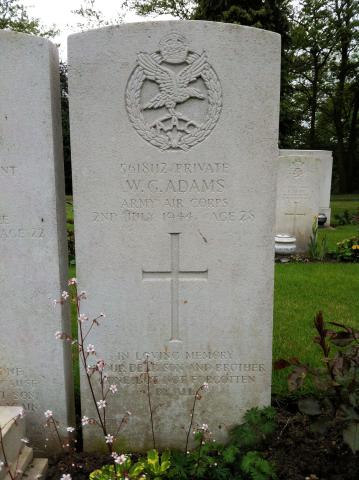