Lance Corporal William Edwin Bamsey was the son of Griffith Charles and Louisa Bamsey of Port Talbot, Glamorgan. He enlisted in the Beds and Herts Regiment and later volunteered for service with the Parachute Regiment. It is believed he qualified as a parachutist at Ringway in 1942. He fought at Arnhem, as part of Operation Market, serving with No 3 Platoon, A Company, 3rd Battalion and jumped on to DZ-X on the first lift on 17 September 1944.

The 3rd Battalion was tasked with taking the Tiger Route into Arnhem (on the main Heelsum- Arnhem road) and assisting the 2nd Battalion to capture the bridge. The Battalion made steady progress for two hours along the main road through woodland when the Germans made efforts to halt their progress. An eye witness account from Corporal Bob Allen in Martin Middlebrook’s book recounts the circumstances of L/Cpl Bamsey’s death:

“I was walking through trees near the edge of a road; Lance Corporal Bamsey was a few feet away to my right. We sensed enemy ahead and both paused – me behind one tree, Bamsey at the side of another. A shot rang out from the right. Bamsey collapsed like a puppet, whose strings had been cut. I located the source of the shot, then dashed across and pulled Bamsey behind a tree. He had been shot through the throat, and the bullet had broken his neck.”

Lance Corporal Bamsey became the first fatality of the 3rd Battalion’s engagement in Arnhem on 17 September 1944, at the age of 21. He was initially given a field burial along the Velperweg at Arnhem in the ‘Bronbeek’ area and is now buried Oosterbeek War Cemetery, Arnhem.

Compiled for ParaData by Harvey Grenville. 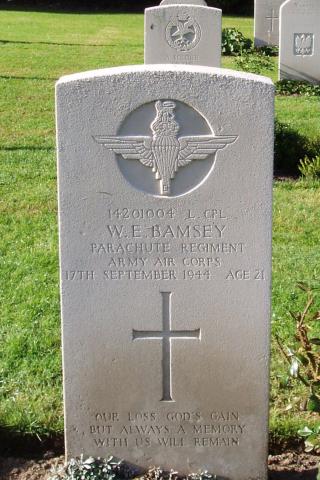