This course ran from 15-28 February 1944. It was a 'Long Course' which included 8 descents. The course was designed to train men to go reinforce the Airborne Forces. 15 officers and 215 other ranks took part. The weather was cold and frosty, described as 'rather trying' in the Instructors course notes.

Bill's instructor noted that he was 'Very good type, good performer, good leader'. Which is maybe why he was chosen to be an Instructor later on.

Here is how his daughter Jo recalls how her father Bill talked about his service.

"The story he told was that he volunteered when war broke out.  Originally he wanted to drive a tank but was told he had a heart murmur so went into the infantry, against the advice of my grandfather, who had been at Ypres.  After basic training, they were all sent off to (he said) Dunkirk, but they kept all the blacksmiths back to make some chains.  There was another Crockett in the same intake who was a blacksmith.  The army got the two mixed up, and despite all protests, sent the other Crockett off and sent my Dad to a shed with instructions to make chains to them required spec, and it was only when it became clear that he had no clue that they believed him.  Then he said they didn’t know what to do with him.  I think he was a driving instructor for a while, then a PT Instructor, but it’s all a bit vague until the airborne came up.

At some point he was in Fishguard in Wales, because that’s where he met my mother, who was working on the buses.  I’m not sure of the dates.  Apparently when they heard he was coming to meet the family, some of her younger siblings were watching the sky, thinking he’d be coming in by parachute and were quite disappointed when he arrived on the bus." 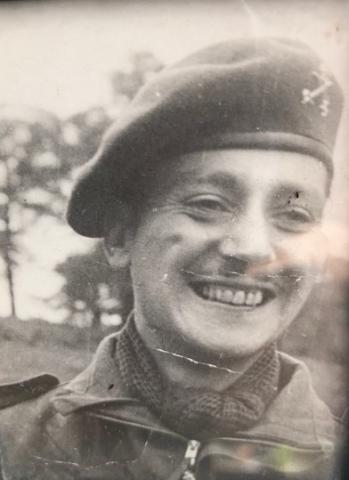