Lance Corporal William Charles Kill was the son of Charles Ernest and Sarah Victoria Eugene Kill, and husband of Ann Stewart Kill. At the beginning of the Second World War he served as a despatch rider in 691 (Mowlem) General Construction Company, Royal Engineers and was awarded a Mention in Despatches for his actions in May 1940.

He later transferred to Airborne service with 1st Parachute Squadron, Royal Engineers  He took part in the Battle of Arnhem, during Op Market Garden. He died on 28 September 1944, aged 29 years old. He is now buried at Oosterbeek War Cemetery, Arnhem.

Sapper Kill served in France as part of the British Expeditionary Force during the early stages of World War II with the 691 (Mowlem) General Construction Company, Royal Engineers. 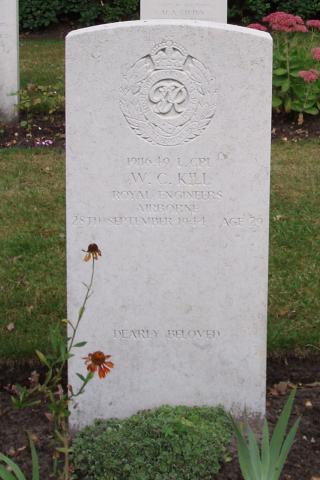