In 1939, when he was just 17 William 'Bill' Collard enlisted into the 4th Gloucester Territorial army which was a Bristol Battalion. Before Bill joined the army his trade was recorded as 'clerk'.  He then volunteered for the airborne forces, and successfully completed his parachute jump training at RAF Ringway on Course 34. This course was in November 1942, and 4 officers and 181 'other ranks' took park. For it's time this was considered a large course.

In 1941 a special force was being formed and he was asked if he would volunteer for that. After being selected, he joined the 3rd Parachute Battalion. He went to North Africa with the Battalion to serve throughout the North Africa campaign. After the Germans were beaten back in North Africa, they undertook the parachute invasion of Sicily. They came back to North Africa when a sea-borne landing at Taranto was required, leading to the capture of Taranto in Italy.

Later in October 1943, he was asked if he would go on a special mission in Northern Italy. This was around 200 miles behind German lines. He went with 6 others from the 3rd Parachute Regiment and they were dropped in the town of Ascoli, in daylight. After three weeks of operation in the area, the Navy was supposed to pick them up. Due to the bad weather however, it was not possible. This meant they had to make their own way back, over 200 miles to British lines.

He went back to England for Christmas in 1943 and underwent intensive training for D-day. He was very disappointed the Battalion didn’t not take part in the D-day operation.

On September 17 1944, Bill was part of the assault battalion who went into Arnhem. When they landed near Arnhem on the second day, he was wounded with a bullet through the knee. As there was not any hospitals nearby, he was taken by Jeep to the Old church at Oosterbeek. It was here a perimeter was formed to keep the Germans out.

At the church he saw a familiar face in Major Dickie Londsdale. He formed a fighting force of around 100 and was told to fight every day for seven days. When the evacuation was ordered, my grandfather could not walk due to his injury. As a result, he was captured by the Germans. He spent 7 months in Stalag XB prisoner of war camp. Bill's POW number 117820 He returned to the UK 17 April 1945.

Letters to the pegasus journal by Bill Collard 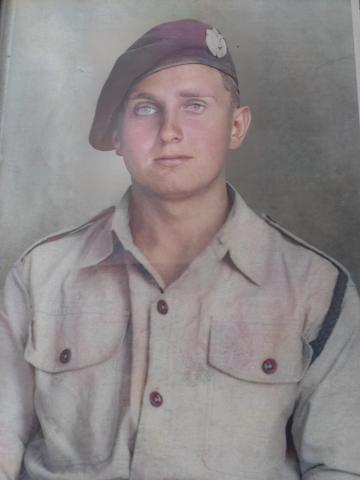