Bill Burns enlisted into The Royal Warwickshire Regiment 1939 at Herford, and was serving as a Sergeant in the 13th Battalion, RWR, when it was turned over to airborne duties in November 1942 and redesignated as the 8th (Midlands) Parachute Battalion.

He was part of a group of 210 men from the 8th Battalion who attended Course 44, which ran at RAF Ringway from 28 December 1942 to 8 January 1943, for parachute training. The course was also attended by Special Commandos and men from the Air Landing Brigade. The course instructors' notes record  that Bill was an "Excellent worker. Keen confident parachutist."

He eventually became Company Sergeant Major for C Company and fought with the Battalion during the Normandy Campaign in 1944. Within days of the Battalion's return to England, Bill formed part of the guard of honour for Lt Col Alistair Pearson and his new wife, Mrs Joan Pearson, after their wedding on 9 September.

Bill went on to fight with the Battalion in the Ardennes during the Winter of 1944-45 and on Operation Varsity, for the Rhine Crossing and the advance into Germany in 1945.

He was wounded twice during fighting with the 8th Battalion, once in Lembeck.

By ParaData Editor with the kind assistance of Keith Burns 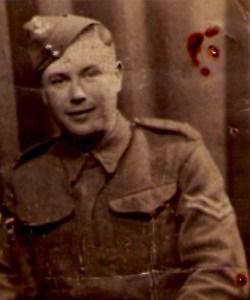