Lance Corporal Ball served with 2 Troop, 4th Parachute Squadron, Royal Engineers during the Battle of Arnhem. He flew to Arnhem on the 18th September 1944 from Spanhoe Airfield. He had been stationed at Bisbrooke Hall, Glaston prior to this. L/Cpl Ball was wounded during the battle of Arnhem.

He died of his wounds on 29 September 1944 in the airborne military hospital, Apeldoorn, aged 23 years old. L/Cpl Ball was buried in 'Heidhof' General Cemetery, Apeldoorn initially before being reinterred at Oosterbeek War Cemetery. 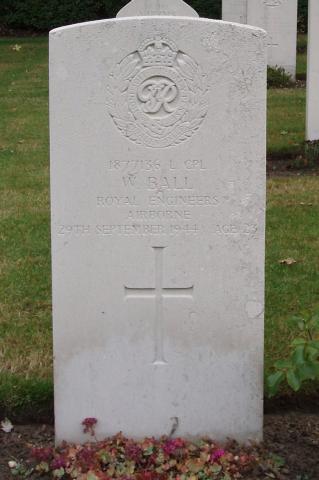