William Burns Ness enlisted into the Duke of Wellington's Regiment, and later volunteered for airborne forces in 1943.

He attended Parachute Training Course 91, which ran at RAF Ringway from 11 to 26 November 1943, as part of a cadre of 281 reinforcements for airborne units. There was an unfortunate delay of four days on the course when bad visibility prevented flying. Once the weather had lifted the delays necessitated all the students to complete 3 jumps each in 16 hours.

After qualifying as a military parachutist  Geordie was posted to the 12th (Yorkshire) Parachute Battalion and served with C Company.

He took part in the Normandy landings, taking off from RAF Keevil in a Stirling bomber on the night of 5/6 June 1944. Whilst en route one of the party wrote all the 20 names of the stick, including Pte Ness, on a five franc note with the message "Thanks for the lift" and handed it to Eric Keen, the pilot. Eric kept the note and it remained a treasured memento for many years.

Once on the ground Geordie spent the first few days defending Le Bas de Ranville under the command of Captain John Sim. On 9 June the Battalion was ordered to advance into Longueval village but suffered heavy casualties, including Geordie Ness who was wounded.

After recovering from his wounds, Geordie rejoined the Battalion and fought in the Ardennes during the winter of 1944-45. He made his second combat jump for Operation Varsity and the final advance into Germany on 24 March 1945,  and after a week of fighting was wounded a second time at Greven on or around 31 March. The battalion had been almost continuously on the move without a break, for the week preceding Geordie's wounding, and advanced 100 miles. From 27 March until their arrival in Greven on 31 March, typically no man had more than four hours sleep a day.

Subsequently Geordie, by now promoted to Sergeant, accompanied the Battalion to the Far East,as part of the 5th Parachute Brigade, until it rejoined the 6th Airborne Division in Palestine in 1946.

By ParaData Editor (HG) with the kind assistance of Dave Tudor. 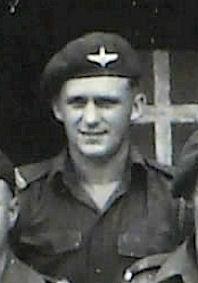 Lynn Ness said:
My grandad Billy love him so much and very proud
Add your comment