William Adams, born in Buckinghamshire, was the son of Horace and Elizabeth Adams, of Attercliffe, Sheffield, and served with 1st (Airborne) Battalion, The Border Regiment, during World War II.

He may have been killed with Sgt Willis who set out with a PIAT in order to knock out a German tank in the Kneppelhoutweg-Benedendorpsweg area of Oosterbeek.

Cpl Adams died on 24 September 1944, aged 21 years, and is believed to have been given a field burial near the junction of Sandersweg and Kneppelhoutweg. He is now buried in the Oosterbeek War Cemetery, nr Arnhem. 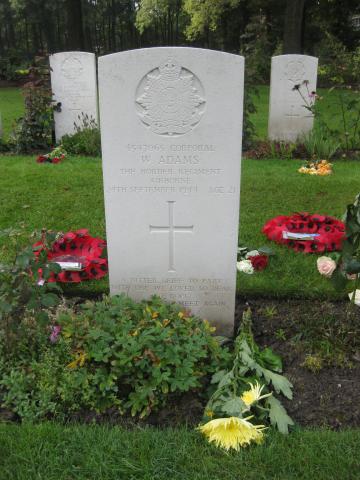