Sergeant ‘Duggy’ Dugdale undertook military parachute jump training course 72 at RAF Ringway between 12 and 23 July 1943. His course report stated: 'A good example to the men and a good parachutist.’

He served with 8 Platoon, C Company (C Coy) and saw active service in Normandy as the Company Quartermaster Sergeant (CQMS) on Operation Overlord. He took off from Broadwell Airfield in aircraft 321. It is believed that he was wounded by 13 June 1944.

When the 13th Para Bn went to the Ardennes he was the Headquarters Company Sergeant Major (CSM).

On the Rhine Crossing he was Company Sergeant Major of B Company, 13th Para Bn.

CSM Dugdale saw service in the Advance to the Baltic, the Far East and Palestine before being posted to the West Yorkshire Regiment in July 1946. 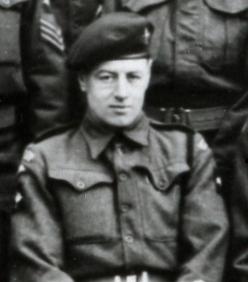