Walter Harold Watson, born in 1920, came from Chesterfield and worked as an apprentice fitter when he enlisted as a supplementary reserve with the Leicestershire Regiment in 1938. Shortly after he enlisted into the Royal Signals as a regular.

He embarked for Egypt in August 1939 and initially served as a signaller in the Middle East with the Western Desert Corps (also known as the Western Desert Force). In April 1941 he was attached to 31st Field Regiment RA, a supporting unit of the 4th Indian Division, and part of the 8th Army.

In April 1942 he was posted on attachment to the 10th Indian Division based in Cyprus and remained with them until posted to 4th Airborne Division Signals in January 1943, a phantom division, where he helped to generate signals traffic to deceive the Germans on allied military strength in the Mediterranean and Middle East during Operation Cascade.

He remained on 4th Airborne Division’s strength until transferred to 4th Parachute Brigade Signals in August 1943, by then training in North Africa. He participated in the seaborne invasion of Italy later in the year and by Christmas had returned to the UK with the Brigade to start preparations for D Day.

A frustrating period ensued with numerous cancelled operations during the summer of 1944. The Brigade was finally deployed for the 1st Airborne Division’s assault to capture the Rhine Crossings at Arnhem as part of Operation Market Garden.

Walter jumped with the Brigade Headquarters on 18 September 1944, the second day of the battle, onto the Ginkelse Heide several miles west of Arnhem. With the element of surprise lost the heath was partially held by the Germans and the Brigade made an opposed landing under enemy fire.

Walter was captured during the battle and became a prisoner of war. He was later transported to Germany and held in Stalag VIII C  at Sagan (which now lies in Poland). The camp lay adjacent to Stalag Luft III, made famous by two prisoner escapes in the films the Wooden Horse and the Great Escape.

In February 1945 he was part of a prisoner party from the camp which was force marched ahead of the Russian advance, and made two escape attempts prior to the Russians liberating them. He maintained a brief diary during this period and recorded that they were poorly treated by the Russians. He was repatriated to the UK in April and placed on the Y List as inactive for two months.

After postings to various signals units he was transferred to the Guards Division Signals in February 1946, by then garrisoned in Germany as part of the British Army of the Rhine. He remained with them until his discharge to the Army reserve at the end of August 1946.

By ParaData Editor (HG) with the kind assistance of Paul Watson 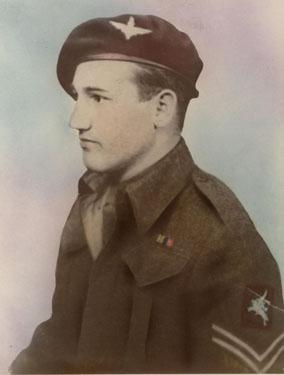