Walter Frith was born in 1924, the son of William Leonard and Blanche Frith, of Sheffield. He enlisted into The Yorks & Lancs Regiment on the 20 May 1943 and upon the completion of his training he volunteered for Airborne Forces.

After completing the selection course at Hardwick Hall, near Chesterfield, he was sent on parachute course 89, at RAF Ringway, 28 October to 9 November 1943. His parachute instructor comments: Rather nervous, average standard.

Upon completion of the course, which consisted of 2 day-time balloon, 1 night-time balloon and 5 aircraft descents, he was posted to the 12th (Yorks) Parachute Battalion.

He parachuted onto DZ ‘N’ Near Ranville in Normandy on the 6 June 1944.

He is buried in Ranville War Cemetery, IIA. E. 5.

Below is a letter sent to Private Frith’s Mother in 1944:

Please forgive me for taking the liberty of writing to you like this. I wish to remain unknown and therefore I am leaving my address out.

I feel as if I am opening up an old wound but, I had to write. I don’t know how to begin, but you no doubt have guessed what it is about by now, you see I do not want to hurt you in any way.

I was in France with your son and I’d like to let you know how he spent his last moments. May you have every reason to be very proud of him and I hope it will ease your mind a little to know what happened.

The company were attacking a strong point and one platoon was trapped, our platoon was ordered to relieve them and it was whilst we were doing this that your son was killed. We were proceeding down the road when Jerry caught us in a barrage of shells and mortar bombs. Half of the platoon were wounded and killed, the other half could have got away, but instead they stayed to bring in the wounded.

Mrs Frith, your son brought four or five wounded in before he was killed. He gave his life that others could live. He was killed by a mortar-bomb whilst he was carrying a wounded comrade back, and I’m sure your mind will be a little at rest to know that he never knew what hit him, he didn’t suffer at all, he was killed outright.

He was well-liked by all ranks and his death was a shock to us all, and we all send you our sincere sympathy, we are sorry to lose such a good friend, comrade, and such a splendid soldier, he was an unsung hero, and will always remain so in our memories till we die.

Please forgive me if I have caused you any unnecessary suffering by writing to you but, I felt it was my duty. I cannot tell you where his grave is, because I did not see him buried, but the War Office will notify you, or the Red Cross. I think it is at a place called Ranville on the River Orne.

I will close now, once again offering you my profound sympathy. 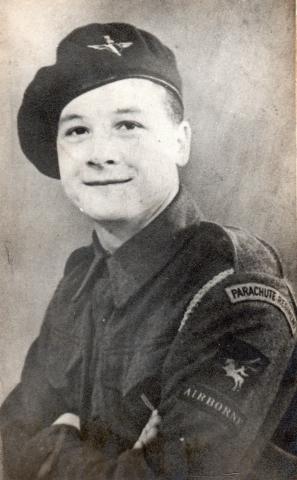