Wallace Mackenzie was born in 1921, the son of Mrs E F Mackenzie, of Wembley, Middlesex.

He joined the Territorial Army in Spring 1939, and was enlisted to 458 Battalion of Third City of London Regiment Royal Fusiliers, a newly-formed Searchlight Regiment. After mobilisation in August that year, he spent two and half years in Norfolk before seeking a transfer to the Glider Pilot Regiment in Spring 1942.

He was posted to No 21 Elementary Flying Training School at RAF Booker on 2 July 1942, his 21st birthday. After completion of the course, he transferred to RAF Kidlington to learn to fly Hotspur gliders, moving on to Chilbolton at the turn of the new year.

In February 1943, he moved to Brize Norton for Horsa training where he was transferred with Andy MacCullough to the Independent Glider Squadron, under Maj Alistair Cooper. Following relocation to Holmsley South, he formed a three-man crew with MacCullough and Sgt Hill training for long distance flights, including several 10 and 11 hour flights around the UK.

Following months of preparation, he was engaged in ferrying aircraft to Portreith, Cornwall prior to the long haul to North Africa in June 1943. On 6 June, Wallace flew with McCullough and Sgt Hill to Sale airfield, just outside Rabat in Morrocco. Wallace remembers the flight:

'[The] tugs were fully laden with petrol and the take off involved a full throttle with the brakes on, and then taking off at about the very end of the runway, with no ability to increase height for quite some time.

In fact, the opportunity was taken to use the 300-400ft that we had above the sea, to put the nose down a little bit and gain some flying speed.'

Despite the promise of a fighter escort, this was never sighted and with no cloud cover the flight seemed fairly exposed, although it passed without event. On arrival in Morrocco, the men were given some leave in the local town of Rabat. Wallace remembered the warm reception of the locals to 'the idea of anything English'. A few days later, he returned the UK to collect another glider, this time flying out to Sale with Major Cooper (who had ditched in the sea with his crew during the first flight) and Sgt Cyril Morgan.

Back in North Africa, he began the process of ferrying aircraft from Sale to Froha, an American airfield in the Atlas Mountains. Although the airfield was well organised and the food decent, the dusty conditions meant it was difficult for glider pilots to see the yoke of the tug towrope. After a series of ferrying missions, he went on to E Strip, on the coast at Sousse, Tunisia.

Although he had now clocked around 140 hours of flight in a glider, with about half as 1st Pilot, he had experienced less than an hour in a heavy glider, including two landings on wheels during the previous March.

Wallace was due to fly as part of the Airborne operation to Sicily, taking off at dusk on 13 July 1943 to fly to Primosole Bridge with an Anti-Tank crew carrying a gun and jeep. He remembers to briefing with RAF and Glider Pilots.

'Our objective was to land as close to the bridge as possible and to the South of it. [...] There was a simple model of the river and the bridge and an indication of where we were expected to land. [Reconnaissance of the area did not see] any obstacles placed there to interfere with a glider landing.

There was some discussion as to the wisdom of using the floodlight on the glider for the landing and the general consensus was that it would make us [...] sitting targets to small arms fire, [so it was decided] we should not use these. This was the only specific discussion of tactics that I recall'.

The planned mass glider landings were without Allied precedent, following on from the German daylight landings at Crete in 1941.

Wallace took off as part of Op Fustian on the night of 13-14 July 1943. After an 'easy flight to Sicily', they were released successfully by their glider tug at 'exactly the spot where we needed to be' to begin their approach:

'We could at that stage see the bridge and the shape of the river.

We cut loose and [...] were well placed to make our descent. There was a certain amount of Anti-Aircraft fire and small small arms fire on the ground, but nothing that was of great consequence.

We came in at full flap, but the light was not good at this point and it was not possible to see exactly where the ground was, so as we pulled back we were more or less feeling our way for the ground. I knew we were very close and our speed was about right[,] but then we hit something that could have been a simple undulation in the ground.

I went through the nose and was unconscious for some time. Robin Walchi was the lucky one, but the four men whom we had met for the first time a few hours earlier, all died in the crash.'

Wallace was eventually picked up and carried to an Aid Post in a small barn. He recalls being given water by some German troops, before men from the Durham Light Infantry came by at dawn the following morning. Effectively, his part in the war had come to an end.

After recuperation in a series of dressing stations, a field hospital and eventually the orthopaedic unit at the British Military Hospital in Algiers. Although his superficial injuries healed quickly, he found himself downgraded to medical category B3 due to a complicated fracture to his right leg.

Despite being downgraded, he remained with the Glider Pilot Regiment and eventually arrived at Netheravon back in the UK, where he trained for a short time doing snatch pick-ups. After the war, he was sent to Palestine with 6th Airborne Division, before he was finally demobbed in April 1946.

His brother, Sgt Bruce W Mackenzie also served with the Glider Pilot Regiment. He flew to Arnhem and died during the Battle on 20 September 1944. After the conflict, Wallace went with a Commonwealth War Graves mission to the area to attempt to recover his body. Sadly, his body was never found and he is now commemorated on the Memorial to the Missing at Groesbeek Canadian War Cemetery.

With assistance from Mike Peters 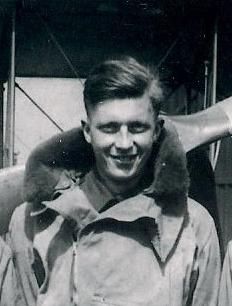