Sergeant-Major (William) Ronnie Vines of 2 PARA was killed by an IRA mine remotely detonated by wire on 5 May 1973 at Moybane, near Crossmaglen. Married shortly before he was killed, Sgt Major Vines died aged 36 years and is now buried at Aldershot Military Cemetery.

The following obituary notice appeared in the Pegasus Journal in July 1973:
"CSM Ron Vines, on his third tour in Northern Ireland was killed in a terrorist mine explosion near Crossmaglen on the 5th May 1973. He was commanding a road clearance patrol from C (Patrol) Company, and it was typical of his enthusiasm and leadership that it was he who noticed and was checking the suspect area where the mine was located. Ron re-enlisted into The Parachute Regiment in 1962 (previously he had served for three years in the Coldstream Guards) and rapidly achieved promotion to Sgt by 1964, in which rank he served in Bahrain, Malaysia, Borneo and Radfan in C (Patrol) Company of the 2nd Bn. He was detached in 1969 to the Royal Marines Training Centre as an instructor and returned to the 2nd Bn in 1972, to be CQMS of B Coy. He was promoted in September 1972 to WO2 and returned as CSM to his first love-Patrol Coy. He was a most competent and professional soldier and was fair and popular with all ranks. He will be sadly missed in the Bn and elsewhere."

Ronnie had two daughters Jayne and Annette with his first wife Phyllis. They were married for 17 years. 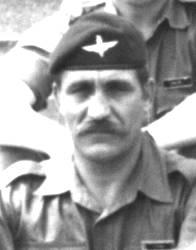