Trooper Vincent Andrews was the son of Harry and Beatrice Andrews of Hillingdon, Middlesex.

He originally enlisted in the Royal Army Ordnance Corps and then transferred to the Parachute Regiment, completing Parachute Course 117, in June 1944. He was subsequently interviewed for and accepted into the 1st Special Air Service Regiment, and joined A Squadron.

On 18 March 1945, Trooper Andrews was part of the combined force from 1st and 2nd S.A.S. Regiment’s which sailed from Tilbury for Ostend. They were part of ‘Frankforce’, named after Lieutenant-Colonel Brian Franks and were to take part in ‘Operation Archway’, prior to Operation Varsity, the Airborne crossing of the Rhine. The force began crossing the River Rhine at 1130hrs on 25 March in a fleet of Buffalo amphibious vehicles and landed on the northern bank near Bislich.

The following day, the force split into two groups, with the 2nd S.A.S. group, under command of Lt-Col Franks traveling East assigned to support the 6th Guards Armoured Brigade, whilst 1st S.A.S. group, under command of Major Harry Poat, were to support the 6th Airborne Division in their advance to the North (later known as the Advance to the Baltic).

The 1st S.A.S group made their first contact with German forces on the 27 March. The next day they were ordered to advance from Erle through Ostrich and on to Rhade, the column of 12 heavily armed jeeps being led by 2 x ‘Dingo’ scout cars:

‘As they passed through the village of Ostrich along a quiet country road, most eyes were on the trees that lay ahead on either side. A large barn was on the edge of the wood. No one saw the young German leap up from the ditch and send a rocket form his Panzerfaust into the leading ‘Dingo’. Suddenly the trees unleashed a squall of gunfire. Vince Andrews was mortally wounded in the throat; Grundy his rear gunner, was shot in the stomach. Bullets ripped through ‘Maggie’ McGinn’s jeep as he tried to reverse down the road. As rounds pierced the jeep he dived into the verge. ‘Dixie’ Dean accelerated forward, between the burning tank [armoured scout car] and the hedgerow, raking the barn with Vickers [mg] fire. Seekings followed him towards the woods through a spray of machine-gun fire. Further down at the back of the column Jeff Du Vivier and ‘Digger’ Weller began mortaring the woods. [Captain Ian] Wellsted [the Troop Leader] and Jack Terry led a foot party round the side of the barn and pounced on some Germans in a slit trench’. 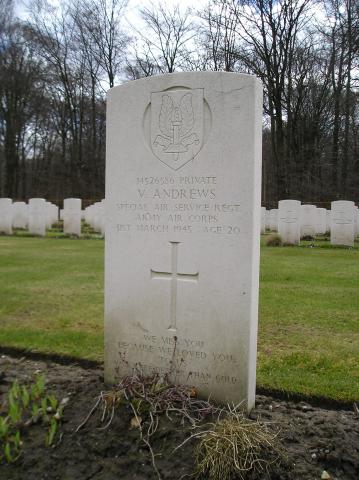