Victor Warnes joined the Grenadier Guards in 1945 and became a clerk. He took the Army Certificate of Education and served at the Guards Depot Pirbright.

He qualified as a military parachutist on course 225 which ran at Upper Heyford from 26 September to 16 October 1947 and was posted to the 1st (Guards) Parachute Battalion in Palestine via The Parachute Regiment Traning and Holding Battalion.

Following restructuring in 1948 the Guards Parachute Battalion was reorganised and downsized. It was initially designated as 16th (Guards) Independent Pathfinder Company but renamed as No 1 Guards Independent  Parachute Company shortly after formation.

Victor later deployed with the Ind Guards Para Coy to Cyprus for Operation TRIMED in 1951.

Compiled with the assistance of Pete Warnes 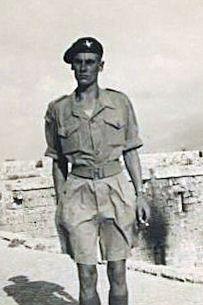