He was killed during a parachute training accident nr RAF Stoney Cross. The Albermarle aircraft of 197 Sqn in which they were flying crashed into a hillside during bad weather.

The Station flying log book report for the incident stated:

The first aircraft of 297 squadron was to drop at 03:00 hours and the other aircraft at 2 minutes intervals. The weather conditions were far from ideal - there were a number of shower clouds about - but despite this, the exercise was carried out and quite sucessfully considering the conditions. The moon was obscured by cloud and the navigators had difficulty pin-pointing their position. Unfortunately, one aircraft pilot Flight Sgt Jubb crashed when making the run to the rendezvous (Ludgershall) at a position where there was low cloud. Of the six R.A.F. personnel, all were killed outright except one who was critically injured, and eight of the ten paratroopers carried were killed, the remaining two being badly injured. Upon returning to base, the 4th aircraft crash landed on the runway, with the result that the runway had to be changed and the last aircraft did not land until nearly 05:00 hours. Consequently 110 troops of the 8th Parachute battalion were dropped in the drop zone as well as 10 troops of the independent parachute company. Night flying time - 25.40 Hours." 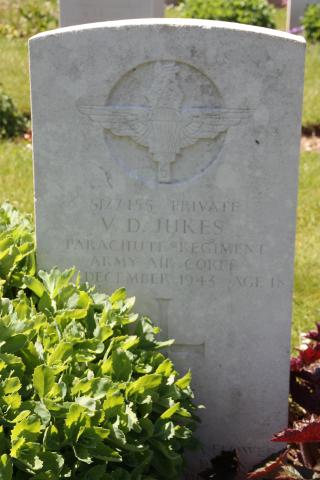