Tony Kempster and his brother, Dave , passed out of the Parachute Regiment and Airborne Forces Depot in Platoon 460, together with another pair of brothers Dilip and Denis Dey who went to 2 PARA.

Tony and Dave went to 3 PARA and fought in the Falklands Campaign. Tony served in Corporal Stewart 'Scouse' McLaughlin's section in  B Company's 5 Platoon under the command of Lt Mark Cox.

During the Battle for Mount Longdon, 5 Platoon's route up the side of the mountain brought them into contact with his brother's platoon. Several members of both platoons were wounded, including Tony's brother, by fire from Argentine machine gun positions.Sgt Ian McKay, Dave's Platoon Sergeant, disabled one of the heavy machine gun positions which had pinned the platoons down.

This allowed the remnants of 4 Platoon under the command of Des Fuller, working with 'Scouse' McLaughlin's section, to continue to make progress, under heavy fire, against the other enemy positions on the ridge. 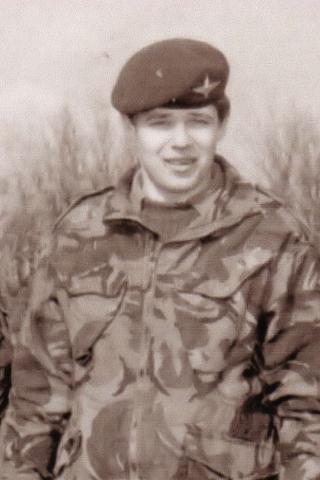 DILIP DEY said:
I was very sad to hear today of Tony Kempster's passing. I spoke to Tony about a month ago and Tony was as usual putting his best foot forward.He was in the advanced stages of a terminal illness BUT typical Tony he was stoic and unyielding to his condition, as he was in his spirit during the Battle of Mount Longdon in the Falkland Islands, 1982.My mind casts back to 30 years ago when a young Tony Kempster in Port Stanley told me of 5 Platoon's hard fought battle; in which his brother Dave had been badly wounded and his inspirational section commander and mentor Stewart (Scouse) McLaughlin, along with other platoon members had been killed in the brave action. Tony Kempster was indeed a soldier you would want to be on your side when fighting in the trenches: "TONY KEMPSTER A REAL PARATROOPER HE" RIP Tony!
Mark Disberry said:
Tony Kempster was Part of my Football team in Paderborn Germany.
The season was 1978-79 and the team became Champions of the League that season, with Tony scoring 40 of the teams 120 goals.
Might add that the team had only conceded 15 goals.
Tony was a fearless striker and great team player. He left school soon after and we ended up working together while still Civilian/Brats at 65 Engineers, Sennelager, preserving Bailey bridge's.
from here not long after I lost contact late 1980 and it must have been soon after that he joined the Para's.
Great times, Great Mate, Greatly missed
Add your comment