Tom Godwin enjoyed a long, almost unbroken service career with the Parachute Regiment, from enlistment in the 1950s, through to his eventual retirement in the early 1990s.

Thomas Godwin originally joined Airborne Forces through Direct Enlistment, and was part of 40 Platoon, at Depot in January 1955, completing his parachuting training on Parachute Course 395 at RAF Abingdon later that year.

Tom joined The 1st Battalion, The Parachute Regiment (1 PARA) as a Private soon afterwards and took part in two very active years, quickly gaining promotion to Corporal by late 1956. This included the deployments to Cyprus and Suez in 1956, before he decided to leave the Army in November 1957.

Two years as a Police Constable in the West Riding Constabulary followed, but he grew restless and decided to re-enlist, rejoining the Colours and returning to C Coy, 1 PARA in his old rank of Corporal in April 1959. Tom was promoted 1961, becoming Platoon Sergeant of D Coy 1 PARA and served on their deployment in Bahrain that year, before embarking on the first of many regimental transfers in 1962. He had been appointed as the Permanent Staff Instructor (PSI) with 12/13 Battalion, The Parachute Regiment at Brighouse and Leeds and would serve with them until 1964.

Sgt Godwin returned to 1 PARA in 1964 and over the following decade he took part in the Battalion deployments to Cyprus, a return to Bahrain, and Aden before a tour of Northern Ireland early in the troubles based at Palace Barracks. Tom continued his progression through the SNCO ranks, eventually becoming the 1 PARA Regimental Quartermaster Sergeant (RQMS) in 1971. In recognition of his lengthy 1 PARA career, he was awarded the 1 PARA 'Tie of Merit' in 1973.

In 1974, was promoted to became a Warrant Officer and Regimental Sergeant Major (RSM) to 4 PARA, and a further transfer to become RSM of 2 PARA followed in 1976. A year later, in 1977, he returned to Depot PARA as RSM before gaining his quartermasters commission from the ranks in 1978.

Tom's first appointment came with 1 PARA, before he joined 2nd Battalion, Ulster Defence Regiment as Quartermaster (QM) in 1979, with whom he served until 1981.

Tom Godwin returned to the Parachute Regiment as QM of 2 PARA in 1981. During the following three years, he served in the Falklands and completed tours to Belize and US. In 1984, he was appointed QM for the All Arms School, Brecon, moving on to became a Major, Garrison QM in Berlin for the British Army of the Rhine (BAOR) in 1987. He remained in Berlin until 1990 - a momentous time in country which included participation in Operation Resettler, following the fall of the Berlin Wall in 1989.

Major Godwin finally retired from the Army in 1990, leaving the service from Depot PARA in 1991, and was awarded the MBE in June that year.

Godders was also a very active sportsman during his service. Principally, he was a member of the 1 PARA Cricket Team for an almost unbroken period from 1955 into the 1970s. He was also part of the Devizes to Westminster Canoe Team (1961), the 1 PARA MELF Swimming Champions (Aden, 1966). He was also a skilled marksman and was awarded the 1 PARA Champion SMG shot in 1960, and the Individual Walther PPK Champion shot whilst with the 2nd Battalion, Ulster Defence Regiment in 1981. 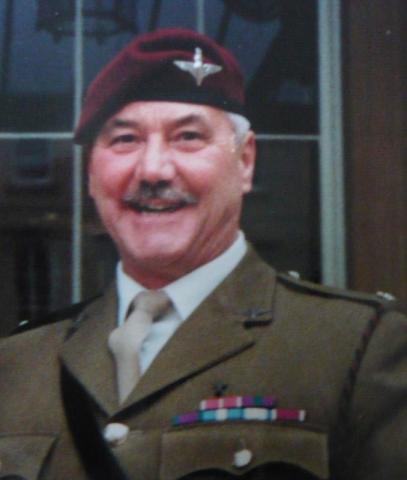